Syracuse leads Georgia Tech at the break, 23-13. Orange quarterback Tommy DeVito is trending on twitter because it is an early game and there isn’t much else to talk about.

He did make a great pass to Taj Harris but otherwise it has been a pedestrian performance, going 8-for-14 and literally half of his 92 yards were on this one pass.

Tommy DeVito dropped it in for a sprinting Taj Harris, and #Syracuse has its third TD of the day 👀pic.twitter.com/6mhoKPqhKj

That said, the reaction to DeVito being the No. 2 trend on social media made for some great reactions.

Danny DeVito was trending.
He is ok. pic.twitter.com/TIvyR5V5zo

For a second I thought Danny DeVito was trending and got scared. pic.twitter.com/4JMXq3ZQbB

Everybody talking about Syracuse’s Tommy Devito: 🏈🏈🏈🏈
Me hopping into the timeline: pic.twitter.com/w5AUQlowav

Racing thru the top 5 tweets to see if Danny Devito died pic.twitter.com/30rhF6i0ui 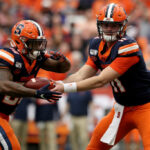 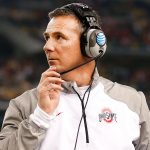