When I say Sunday was a complete washout, I’m talking it never stopped raining for approximately 15 hours. Driving rain. 100% humidity rain. The misty version, right in your eyes when you try to walk from the car to the Costco front door rain. I’m talking do the dishes, the laundry, clean up the house because you’re not going outside rain.

By now you guys know I rarely sit in the house on a Sunday to watch TV from May 1 until football kicks. I actually sat there and watched England miss those penalty kicks and watched Vinny Del Negro complete a great comeback on John Smoltz at the American Century Championship (full list of scores — here). By the way, NBC might want to chill with its constant coverage of the Curry family. We get it, you love the Currys. And we get it, Patrick Mahomes and Travis Kelce party. You know who tries too hard to come off as a party guy? Kelce. He should force it a little more. And then they put those two with Justin Timberlake. That led to some cringey TV.

I didn’t watch all three hours or whatever NBC showed, but I never did see 76-year-old Al Michaels hit a golf ball. Al finished last at -85. That’s tough to do when the worst you can do on a hole is -2 for a double bogey. Bogeys were worth zero points. Taking a look at Al’s scorecard, it appears they stopped counting strokes at a double bogey because Al had a ton of them over three rounds.

As for Charles Barkley, his golf game isn’t laughable, which is tough since we all had so much fun with how bad he was for years. Chuck had seven pars Sunday to finished tied for 76th place. He didn’t sink a birdie over three rounds, but the guy is now able to keep his double bogeys under control and shouldn’t have to worry about finishing in the basement ever again, especially as long as Al Michaels is playing in the tourney.

• Anonymous emailed to tell me that the American Century party scene has changed over the years for the worse. I wrote last week about how Barkley would hold court and throw a massive party. It sounds like those fun days are over:

The access to the celebs is not what it used to be. We have “Arty the Party” which is the main nightly draw. He has been a DJ at Harrah’s center stage every weekend forever. Celebs get on stage. Sing. Dance. Carlton does his Carlton Dance and sings some Michael Jackson. Charles Barkley has been known to have many bottles of Patron pouring shots straight into mouths on the dance floor below.

But all that changed a couple years ago. Harrah’s now barricades the whole dance floor/seating area for only the celebs. They take over many of the better restaurants at night with private parties. So if you plan on dinner, especially at Edgewood golf course, Harrah’s, or Harveys, call ahead. Arriving by boat you use to be able to walk the course. They now have it fenced off with access points where they check tickets. You would think boat gas would be price enough.

• Saturday night, I received texts from my friends back in my hometown telling me how they were reading Friday’s recap of TNML and now they’re begging me to come home to eat, drink and tell mowing stories. Clay told me when I agreed to come work for him that this would raise my profile and that there would be some serious eyeballs on my work, but I didn’t know it would lead to my old friends coming out of the woodwork like this. Guess I’ll be going home soon to suck down some of that SW Ohio air, maybe inhale a Marion’s pizza, and of course get back to my roots with a fresh 12-pack of Busch Lights from the drive-thru.

Hope you are enjoying your Sunday evening. Currently up about 35 miles west and north of Minocqua, WI on a little known spot called Boot Lake! My FIL’s family homesteaded here in the 1920’s and the log cabin we come to has been here since the 30’s.

It is not Thursday, but lake life moves a little differently and as my MIL is battling stage four lung cancer (thus cabin trips are limited), I wanted to give a shout out to my FIL: he crushed a ton of mowing the last couple of days! There are the pictures attached, which having done it myself in years past, I know how much freaking work it is to mow 24” of wavy grass to what you see in the pictures. But there is also the unseen spots around the cabin, fire pit, and ‘driveway.’ He is an amazingly faithful man and I wanted to make sure he got his due.

We were in Minocqua this afternoon and got to hit up our favorite spots: Sallets Northwoods outfitters, Minocqua Popcorn (Jalepeno cheddar is amazing!), Dan’s Minocqua Fudge, and of course The Shade Tree bookstore.

Love your stories and enjoy hearing all about your family. Thanks for being an honest and refreshing voice on the sometimes dark interwebs! 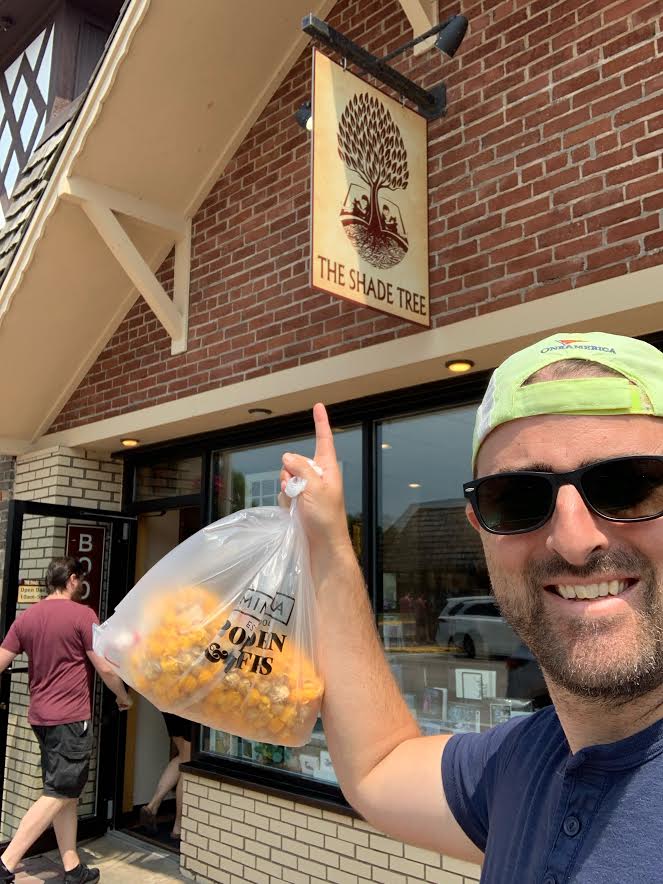 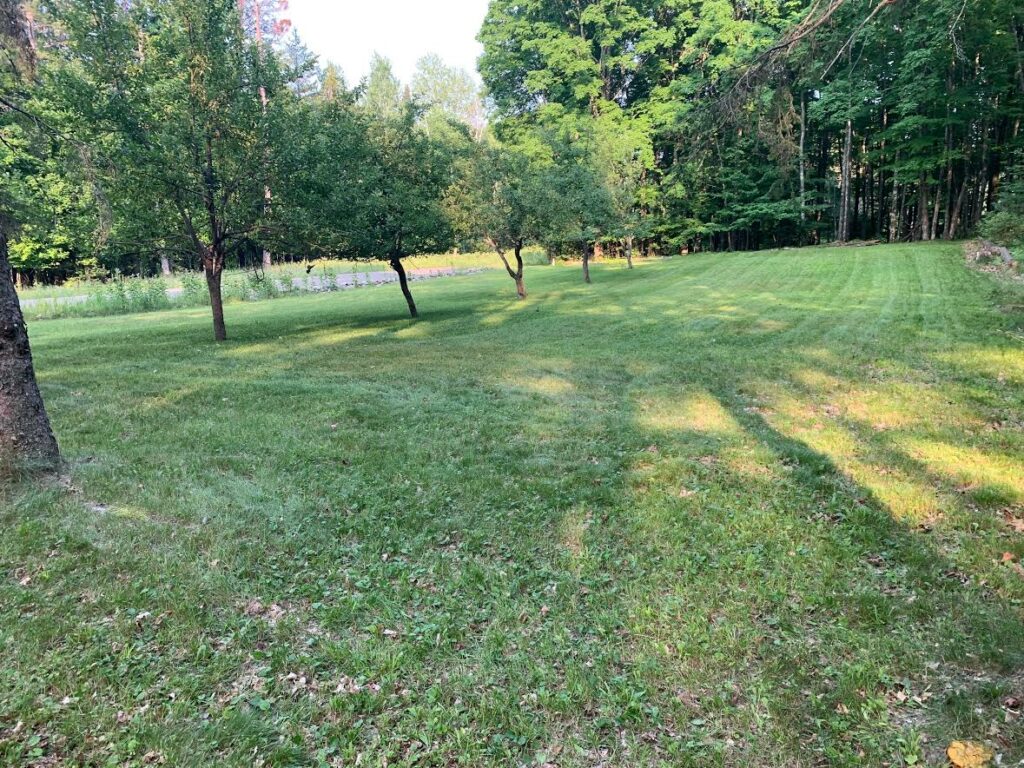 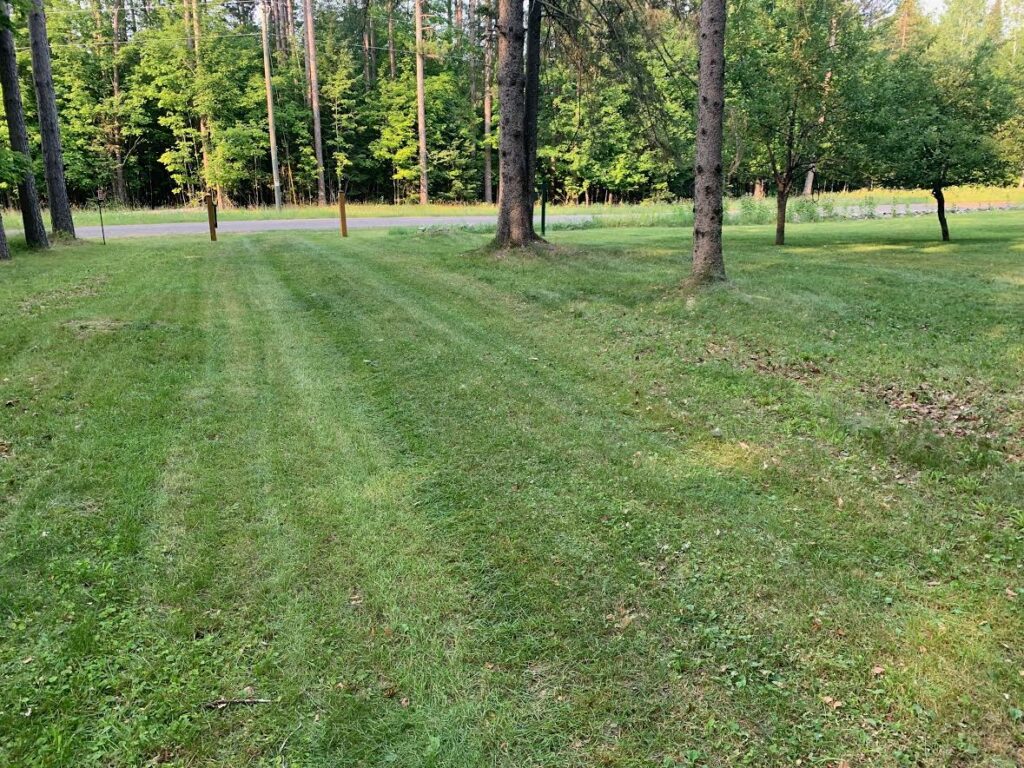 • Patrick C., a reader who lives right down the road from me, sent word Sunday night that his annual golf trip was another huge success. Read Patrick’s words and imagine the joy that golf trip brings to him. Get some of that joy in your life if it’s not already running through your veins.

Forgive me for the length of this story, but 12 of my buddies, six from Saginaw and six from Clawson, MI have been gathering in Traverse City for 32 summers now on the second weekend in July. We all met at Central Michigan University and have remained friends all these years later. It started as a weekend to sail around the bay and drink beer but has evolved into a sports competition we simply call All Sports Day. Originally, it was a day of golf and lob pitch baseball. Eventually, our aching bones and slightly overweight bodies could no longer run out a single or even a rare round-tripper around the bases like we used to, so we stuck with golf. This year marks the 26th year we have been playing All Sports Day and over that time our trophy is a broken Travis Fryman bat with an oak base and a silver chalice atop of the bat. Our version of the Stanley Cup. Each year the winning team gets their name on the trophy as a time stamp of their accomplishment. I am a father of four, outkicked my coverage in marrying my wife, somewhat successful, and blessed to have the friends l do, but winning that trophy is the closest thing to utopia I can think of. How we acquired the bat should be discussed over a cold beer somewhere, but I think Kenny Chesney sang it best, “…I fish, and I play my guitar, laugh at the bar with my friends. I go home to my wife; I pray every night that I can do it all over again.” This past weekend the men from Team Clawson battled and came from behind to win the Fryman Cup on the final putt of the last hole!

That in an essence is what our summer trip is all about. When I read of your excursions of up north or your Put-In-Bay event, I envision the same joy with good friends and great times. 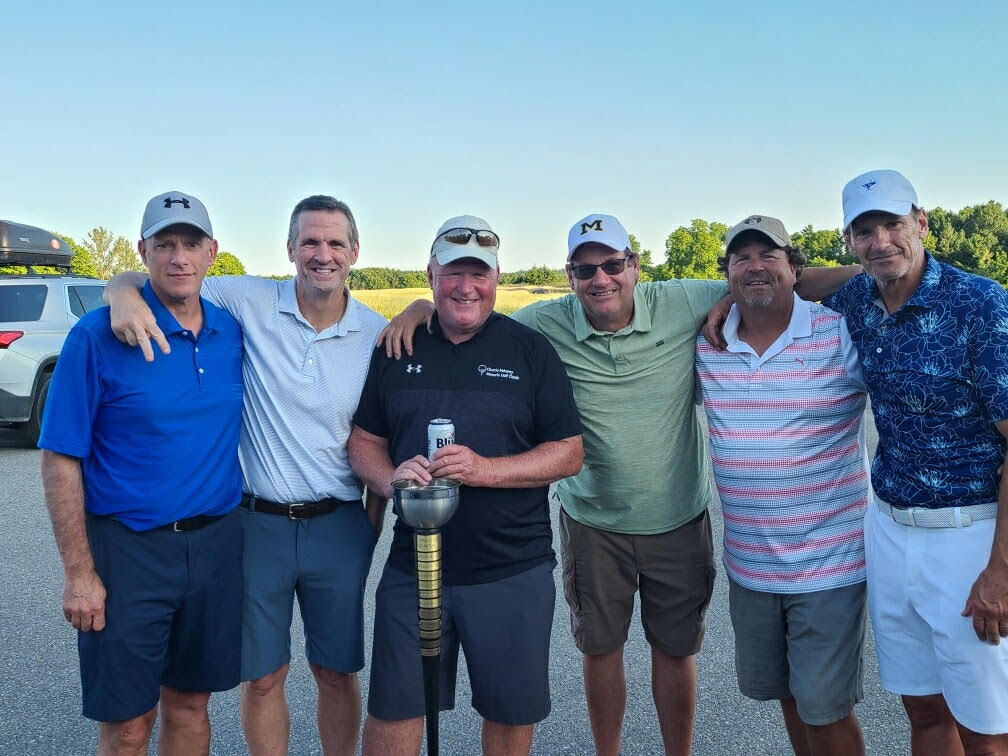 You can't make it out of the third inning, and you get checked for foreign substances pic.twitter.com/WiI5jWXdoX

Mark Davis quite literally just bought that shirt and took it out of the wrapping 15 seconds before arriving pic.twitter.com/vhYTs5dGFh

Furyk and Fluff have done it again! pic.twitter.com/suy342OYv7

I just made her a member of the #TNML https://t.co/sdBK9dRTWz

Those reverse sideburns definitely get Marcus a spot in the competition for Best Hair in the Hancock County Jail pic.twitter.com/sxtuqbPBgN

Competition for Best Hair in the Hancock County Jail really heating up 👇 pic.twitter.com/31nHQRqmBD

A post shared by Dj A-DUBB / THE BLACK HAMMER (@djadubb)

Who knew? 🤣 Debby says she used a slinky to keep squirrels from invading her bird feeders!Send your videos here: https://bit.ly/36x988a