An unnamed journalist is attempting to reach Junior Seau. But without a time machine or a spare key to the pearly gates, he or she is unlikely to hear from Seau anytime soon. The Hall of Fame linebacker tragically passed away in May 2012, nearly a decade ago.

Longtime NFL reporter Jim Trotter shared a series of messages he received from a self-described “primarily basketball writer,” seeking his assistance in tracking down Seau.

Let’s assume this “primarily basketball writer” is a guy. For simplicity’s sake. And also because he probably is a guy.

Anyway, clearly he should stick to basketball, or maybe turn on a TV once every decade or so. Or try a quick Wikipedia search. It’s a very helpful resource in such moments.

Young journalists, please do your homework before reaching out to potential sources. Google search is your friend. pic.twitter.com/snFud305ht

According to the messages shared by Trotter, this anonymous journalist is eagerly seeking Trotter’s help:

“I am trying to reach Junior Seau to hear what he thinks of the NFL donating $1 billion towards the cannabis industry to study the impact of cannabinoids on treating pain management.

“Please give me a call at your convenience.”

Seems as though someone did a little first-hand cannabis research himself before pushing “send.”

Trotter replied back by suggesting the anxious and unaware journalist google Seau.

But this determined journalist would not be denied, responding: “What was the problem, Jim? I have been doing this for over 30 years. I prefer to do my own interviews rather than rely on Google.” 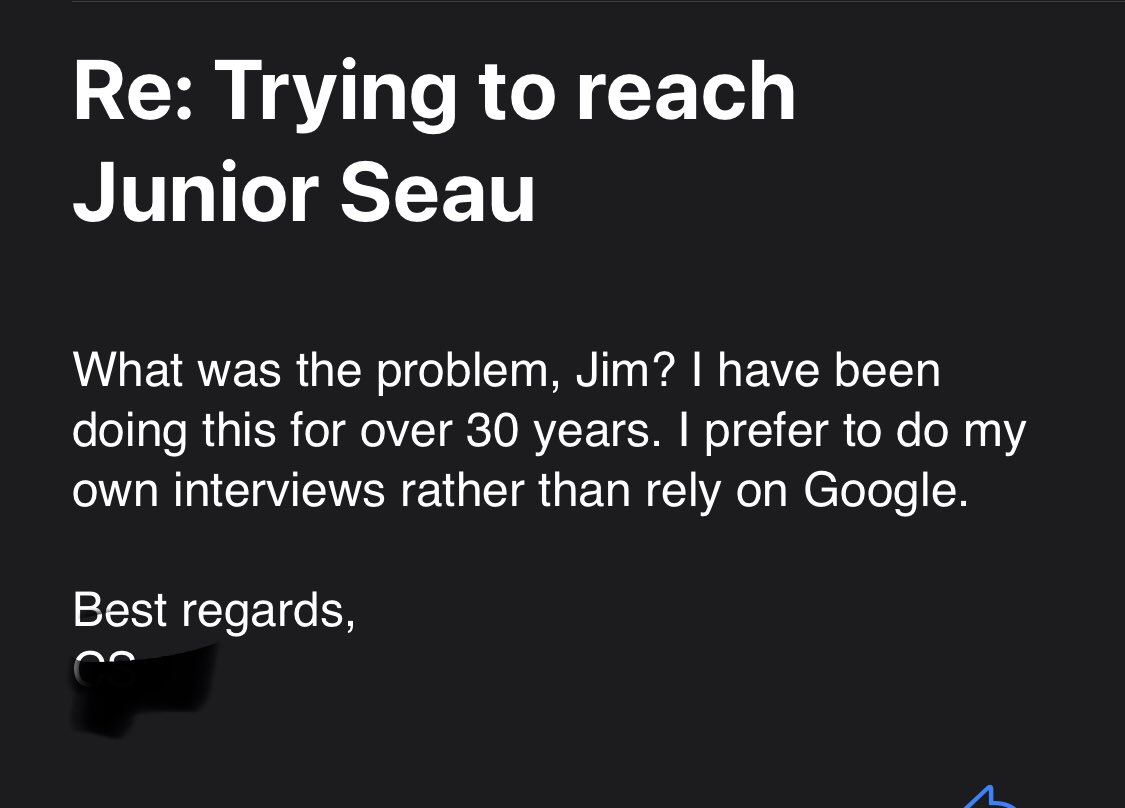 If ever there were an ideal moment for the hand-to-forehead emoji, this was it.

The unidentified scribe had one final exchange with Trotter, apologizing for the error and blaming it on his focus on hoops:

“I apologize. I am primarily a basketball writer. I did not know about what happened to Junior. I was unaware.”

We can’t blame the guy for devoting himself to the grind. Even a novice journalist would tell you that it’s remarkably easy to bypass any and all coverage of a Hall of Famer NFL player taking his own life, when you are solely focused on giving your undivided attention to the sport you cover.

It’ll be interesting to see where this cannabis story is headed now that it hit an unexpected dead end.

And as always, RIP, Junior. We miss you, sir.