For several months, the Washington Post has published stories indicating that the Washington Football Team cultivated a toxic work environment for team cheerleaders. In August, the Post revealed that it had obtained in-house videos of semi-nude cheerleaders. Now, Beth Reinhard, Liz Clarke, Alice Crites and Will Hobson have the team’s former cheerleading director Donald Wells on record, recounting a direct, crude and objectifying remark Snyder once made.

According to Wells, at a 2004 charity event where the cheerleaders performed, Snyder told him that he’d “better keep them skinny with big tits, or I’ll f—— kill you.”

Wells was the cheerleading director for the Washington Football Team–then known as the Washington Redskins–from 1997 to 2009. Wells has often wondered what more he could have done to prevent the mistreatment of the women on his team.

“I would never have told anyone about that if it weren’t for the revelation that the videos were created of my cheerleaders without their knowledge,” Wells says he told Lisa Banks, an attorney representing 12 former Washington cheerleaders. “I was embarrassed and scared if I said anything I might be fired.”

Snyder declined to interview for the Washington Post story. His attorney and PR firm did not respond to inquiries detailing specific allegations, however the team did issue a statement to the Post: “Like many companies and organizations, the Washington Football Team is examining its historical practices and behaviors. We take the criticisms of our cheerleading program seriously and we remain committed to reviewing all programs thoroughly.”

This latest story comes as a follow-up to a Washington Post exposé published in August, revealing that team broadcasting staffers had produced semi-nude videos of the women:

“Then-senior vice president Larry Michael told broadcasting staffers to produce the videos, according to two ex-employees, one of whom said the footage was to be assembled for team owner Daniel Snyder. Snyder and Michael have denied any knowledge of the videos, copies of which were obtained by The Post. The videos include clips during which some of the cheerleaders’ nipples are exposed as they shift positions or adjust props shielding their breasts. Two of the women’s pubic areas are obscured only partly by body paint. The videos are set to the same three classic rock hits, including one each by The Rolling Stones and U2, two bands Snyder said were his favorites in a 2011 interview.”

The Washington Football Team originally hired a firm to conduct an investigation into the story. However, the NFL then announced it would be taking over the investigation of “alleged workplace issues.”

At some point, you have to wonder how much longer Snyder’s fellow NFL owners will tolerate his behavior. What exactly is the threshold for unforgivable institutional misconduct, and how has Snyder not yet crossed it? 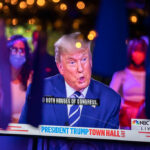 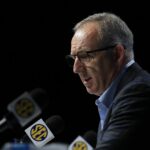