Dabo Swinney clearly isn’t done with his war of words with Florida State head coach Mike Norvell after the cancellation of Saturday’s game over, in Norvell’s words, “a COVID concern.” Dabo thinks FSU pussed out and used a Clemson COVID situation as an excuse to call off the game. Norvell fired back Monday, explaining that he’s just trying to protect his players and making sure the Clemson-FSU game is played safely in Tallahassee.

Dabo’s still steaming mad that his school’s out $300,000 and hasn’t played since losing to Notre Dame on November 7.

Norvell was asked about Dabo not letting this drama go away and whether he would like the opportunity to fire back and keep this content going. “I’m really pretty much done talking about it. We’re moving forward,” Norvell said.

Clemson plays its final home game Saturday against Pitt before traveling to Virginia Tech on December 5 for the regular season finale. The ACC Championship is scheduled for December 19. That leaves December 12 as an option for a rescheduled Clemson-FSU matchup. Don’t hold your breath that Clemson fires up the jumbo jet to make that game happen. 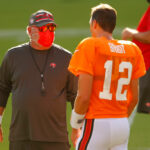 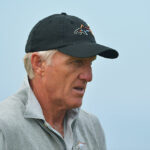