The offices of the Thursday Night Mowing League will be busy this afternoon.

A ruling and likely suspension needs to be taken into consideration after a New Brunswick, Canada wedding was interrupted by the (normally sweet) sounds of a Karen-ly neighbor touching up the lawn as vows were being exchanged.

TikTok user Vampyyric detailed the poorly timed trim in a post that shows a gardening-gloved neighbor firing up the mower and weed whacker as the bride and groom walk the aisle, then continuing throughout their vows.

“The second the bride’s song came on and she walked down the isle (sic) this Karen decided to PURPOSELY mow her lawn and yell at us to ruin the wedding,” wrote Vampyyric.

Karen’s cut reportedly took place on June 11th, a Saturday. In addition to the fact that this woman chose to cut during nearby nuptials –  I know TNML commissioner Joe Kinsey will be livid once he finds out that this mow took place on a weekend! Any person with an ounce of self respect knows, we mow on Thursdays.

Thursday Night Mowing League: We Made It To The All-Star Break

Vampyyric further detailed the neighbor’s naughty move, stating in her TikTok: “She continued through the entire wedding and we could not hear the vows etc.” Sure enough, the video backs up that claim. As bride and groom share loving words, the familiar hum of a weed whacker drowns them out and Karen chops away at an overgrown mound of knee-high grass. 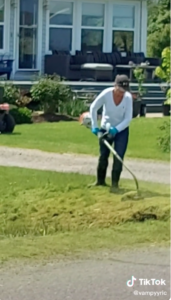 Being that the Thursday Night Mowing League is currently regrouping and rehydrating during this week’s All-Star break, we should expect a decision on Karen’s actions sometime next week, just prior to the start of the second half of the mowing season.