Little did Mark Zuckerberg know all those years ago when he started Facebook for Harvard students to connect with each other, little did he realize that in 2022 his little project would turn into a place where Americans would argue over Cracker Barrel serving plant-based sausage.

But those are exactly the times we’re living in thanks to a post this week where the down-home breakfast chain based in Lebanon, Tennessee told customers it’s time to “Discover new meat frontiers.”

Those are fighting words.

“Experience the out of this world flavor of Impossible Sausage Made from Plants next time you Build Your Own Breakfast,” the company’s social media team wrote on Facebook.

The company officially has a viral post. At the last count, there were over 6,600 comments on the post as Americans fight it out on the Facebook streets. 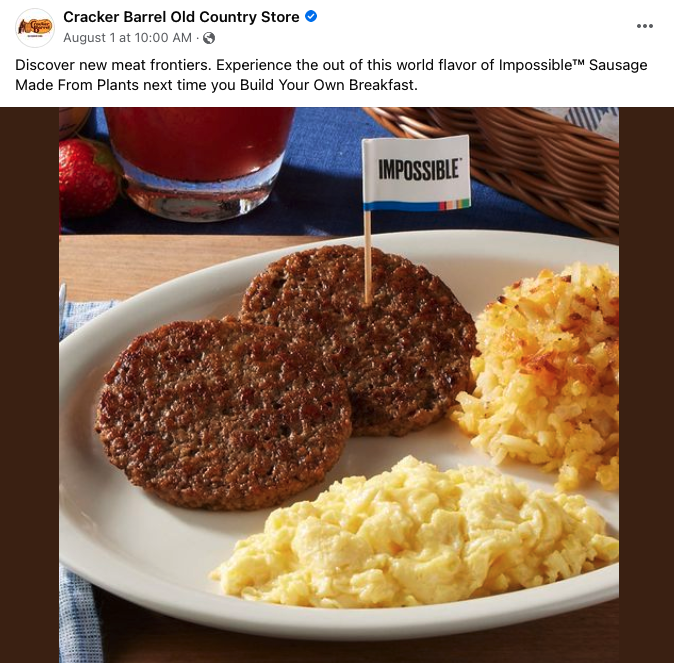 Let’s dive right into the two sides and how they’re handling the situation:

It’s amazing the snowflakes here getting triggered by a meat alternative showing up on a menu. Y’all can still order regular meat, you know that right? Some of y’all need to grow a backbone immediately.

Laughing at how many snowflakes here are triggered by them adding a menu option that doesn’t affect your eating their food in anyway.

Send them back to Gates. We don’t eat in an old country store for woke burgers.

Are you kidding me? Who do you think your customer base is? I still order the double meat breakfast and it’s not even on the menu anymore.

• Garry R. is fair & balanced with his approach:

May be for some folks, but not me. I like old fashioned sausage with my breakfast. If some customers want this and willing to paid for it, then more power to them; but give me real sausage and bacon.

• Donna S. wants people to be nicer to each other:

So here’s my 2 cents worth: I don’t have any interest in trying plant based meat. If you choose to, that’s fine with me! However, this whole dialogue here is disturbing! Why do people feel the need to wish people dead, or call them Dumb because they don’t agree with you? WHAT IS WRONG WITH YOU PEOPLE?? Isn’t there enough hatred out there, that you can’t agree to disagree over a menu?!
SMH

Impossible is correct, it is impossible for me to eat that !!!

I’ve pretty much avoided eating at Cracker Barrel because of the closed minded a$$holes who typically visit that establishment. I don’t like being around those kind of people. Sounds like I can start eating there if these people will be boycotting. Thanks!!

What a war we have here, folks. On one side, you have the wokes who love the idea of Impossible Sausage because it represents a shift to their woke ideals of a world where the wokes eventually determine the menus, whether biological males can dominate biological female athletics and how much destruction criminals can bring to cities all in the name of being woke and not wanting to come down on thugs.

What the wokes within the Cracker Barrel argument forget is that Bill Gates is indeed a big investor in Impossible and other plant-based fake meat companies. These wokes are supposed to hate corporate scum billionaires. In this case, they don’t.

On the other side, you have people who are burnt out over continually having it shoved down their throat how they eat wrong, they listen to the wrong music, they live in the wrong type of housing, they don’t have perfect teeth, they don’t shop at the right stores, they’re poor, they’re uneducated, etc.

Of course they’re going to lash out over Cracker Barrel telling them to “Discover new meat frontiers.”

It’s a natural reaction from people across the south and through the midwest who are worn out being told that woke meat is the only way forward or this world will crumble.

All the while, Cracker Barrel is just looking at the numbers.

The past 10 years the push towards plant-based diets has accelerated quickly.

This is in response to the increased meat consumption, which mostly comes from the poultry industry.

Throw it all in a huge social media mixing bowl and you have a war. That’s how the sausage is made these days.