“The road to hell is paved with Ivy League degrees,” Pete Hegseth reminded OutKick readers earlier this month. And somehow, the Ivy League has gotten worse since then.

Columbia University has now proudly announced that it is planning to hold six additional graduation ceremonies divided based on students’ race, sex, and other aspects of identification.

Got that? At Columbia, race not only determines how students are treated, but it also tells them which group they should celebrate graduation with.

The school’s website provided the details on “Graduation ceremonies for Native, Asian, ‘Latinx’ and black students taking place for Columbia College, Columbia Engineering, General Studies and Barnard College at the end of April. Another dubbed ‘FLI Graduation’ is for ‘first generation and/or low income community.’ The school also hosts a ‘Lavender’ graduation for the “LGBTIAQ+ community.”

Should one write a book on far-left indoctrination camps, those would be the chapters.

A large portion of our country’s insanity originates on college campuses, which train students to follow demanded trends, not to think for themselves.

Just last month, Elon University held a “Whites-only caucus” to “give white people a space to learn about and process their awareness of and complicity in unjust systems without harming their friends of color.”

Law schools are now ranked based on their levels of “whiteness.” If a law school keeps its whiteness down, it wins. If not, it is shamed.

Here is one of the scorecards sent via The Whitest Law School Report: 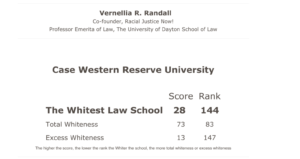 Pick your college wisely. Or go learn an in-demand trade.