Monday night Alabama played Georgia in an all SEC title game and ratings rose 10% over last year’s Alabama Clemson national title game that was decided on the final play of the game. That 10% rise in college football national title game ratings, coming on the heels of another double digit rise in the playoff games between Oklahoma-Georgia and Alabama-Clemson, coincided with a 13% drop in NFL playoff ratings over wild card weekend.

So far I haven’t seen anyone else point out the dichotomy of these ratings moves — the college football playoff surged despite airing only on cable and featuring only Southern teams while the NFL tanked despite games being available for free on ABC, NBC, CBS and Fox. The NFL’s 13% collapse in ratings follows a 2017 football season that saw NFL ratings decline 9.7% and this year’s fall comes on the heels of another 8% ratings decline from the 2016 football season.

In the past two years the NFL has lost roughly 20% of the viewing audience that the league had in 2015 and, as Outkick previously reported, the NFL’s collapsing ratings are leading to ESPN/ABC, Fox, NBC and CBS projecting a $500 million advertising revenue shortfall relative to their projections. I’m told that revenue shortfall could be even more substantial than the $500 million shortfall if playoff numbers don’t improve substantially over the next two weekends.

Already the sports departments at these respective networks are adjusting spending plans and cutting back expenditures to handle this revenue shortfall.

If people are paying more attention to political news and watching it on television more, which I think they doubtless are, shouldn’t that change in viwership impact college and the NFL playoffs similarly? Plus, it’s not as if college football suddenly had a miraculous match up featuring four playoff teams from four different regions of the country. There were four playoff teams, all effectively Southern in regional fan bases. (Oklahoma and Clemson are both shadow SEC programs from pretty much the same geographic footprint as the SEC). Plus, the all SEC title game between Alabama and Georgia had led to dire predictions of limited viewership and fans of other conferences promising not to watch in protest. Instead, the Alabama and Georgia game beat the ratings of the previous two years of playoff title games. This was not, in any way, an ideal four teams for college football TV ratings.

Now the NFL apologists can point to the playoff match ups not being very sexy, but all four wild card games were actually pretty competitive. It’s not like we had four massive blow outs; in fact, it was the exact opposite — all four games weren’t completely decided until the final five minutes, and three of the games went down to the final minute of the fourth quarter. What’s more, Atlanta and Los Angeles are two of the biggest television markets in the country and Cam Newton and Drew Brees, playing a highly competitive and exciting game in the premier time slot head-to-head, are two of the biggest stars in the league.

So why did college football ratings surge while the NFL plummeted?

I think it’s the politicization of the NFL protests. I believe the NFL has lost its way with the anthem protests, alienating its core fan base in the heartland of the country and driving away nearly 20% of its viewership in the past two seasons.

Yet the NFL has still been slow to react to this crisis in viewership that is costing its TV partners hundreds of millions of dollars.

How many entertainment businesses in the country could handle 20% of their fan base disappearing in two years? This should be a holy crap moment for the league, which should be having emergency meetings designed to fix this issue. Instead, the NFL seems to be just hoping the story goes away.

And, amazingly, most national media have ignored the story or, even worse, they’ve pointed to the fact that the NFL games are still highly rated as evidence that the protests aren’t very impactful.

Why have the national media not covered this story aggressively? I suspect for several reasons: first, the NFL has intentionally tried to kill the argument that the protest has had a substantial impact on their business because if that story becomes mainstream then it risks seeing the protest grow even larger. Second, most national media are liberal and don’t want to give credit to a conservative fan protest. Rather than cover the conservative fan protest they’ve chosen to lionize the protesting players as heroes. Third, most national media live in New York or Los Angeles or other coastal communes and don’t actually hear from fans in the heartland. They’re in a bubble and don’t know what the rest of the country thinks.

My listeners and viewers have anecdotally been telling me they were choosing not to watch the NFL because of the protests for the past two years and I’ve been one of the few national media members to discuss this at all. Two of my close family members, my father-in-law from outside of Detroit and my uncle from outside of Chattanooga, have both told me that they stopped watching NFL games over the protests. Indeed, my father-in-law, a lifelong Detroit Lions fan wasn’t going to put the Lions on at Thanksgiving dinner until I asked him to do so this year. He’s highly educated, politically moderate, and not given to histrionic overreaction to sports. After all, he’s a Lions fan and has been for fifty years.

Trust me, he can handle football disappointment.

One year he bought my wife and me tickets to see the Titans play the Lions on Thanksgiving and in years past the NFL games have always been on in his house for Thanksgiving.

But not this year.

When I asked him why he told me he just didn’t need to see politics when he wanted to watch football. If the players could protest things they didn’t like in this country, then why should he, a fan who was helping to pay their salaries, not exercise his own right to protest and not watch them play?

The NFL’s ratings collapse suggests my father-in-law’s not alone, that there are millions of other people just like him, people who would otherwise watch the NFL but have chosen to do something else with their time.

My uncle’s viewing decisions are also increasingly common — he was upset by the protests so he decided to watch his local team, the Tennessee Titans, but not to watch any other teams play. In years past he would have watched national games on Monday Night Football, Thursday night football, and other national contests. This year, he’s not doing that.

Ratings reflect that millions of other football fans are just like him, tuning out the national football games.

Donald Trump understands this on an intuitive level, it’s why he showed up for the Alabama-Georgia game and strode out onto the field to stand for the national anthem before the college football title game. I’m told that Trump’s appearance for the national anthem was a well guarded secret, hardly anyone knew he would be on the field for the moment. The college football playoff organizers had no idea he’d be there on the field until he told them he planned to walk out for the anthem just minutes beforehand.

Trump knew exactly what he was doing — he was showing his base that he honored the country before a football game featuring two states he won in the 2016 presidential election, he stood for the national anthem. What’s more, he was going to make his hated foe, ESPN, actually show him live on television standing up for the national anthem. Many in the sports and political media missed this connection, but Trump’s base of supporters didn’t.

Through all of these collapsing ratings the NFL owners have mostly remaining silent, fearful of making things worse by opening their mouths. But NFL commissioner Roger Goodell has bungled this issue. Worst of all, he wasn’t proactive in realizing an issue like this might arise.

The NBA has a rule requiring all players stand for the national anthem and, guess what, all players have stood for the national anthem. As a result the NBA, whose players, coaches and owners are certainly outspoken politically, has managed to avoid the anthem controversy completely. If the NBA were smart, they’d give David Stern a $100 million bonus for solving this issue before it arose. And if the NFL were smart they’d actually sanction Gooddell for not recognizing this issue and solving it two years ago.

Instead Colin Kaepernick’s anthem protest, and the resulting protests surrounding it by other players, have cost the NFL’s TV partners hundreds of millions of dollars and led to a precipitous decline in TV ratings. Yet the league continues to do nothing and hope the issue just goes away.

That’s not a plan, that’s a Hail Mary.

The NFL better hope the ball is caught because otherwise the league’s on track to cost its television partners billions of dollars and millions of fans.

If the league were smart it would do what Dallas Cowboys owner Jerry Jones, a man who lives in Texas and has the pulse of the heartland football fan, has been suggesting for the past several months — mandate all players stand for the national anthem as a condition of their league employment.

It’s not a revolutionary idea, it’s the same exact thing the NBA has already done.

But the league’s not smart, so I expect the hundreds of millions of dollars in losses to continue to roll in throughout the playoffs.

And I expect college football, which doesn’t have the same anthem controversy, to continue to grow its product while the NFL’s product declines. If you need any further evidence of this occurring, just look at the playoff ratings for both sports. 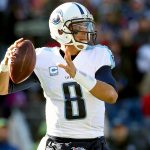