Week 11 of the college football season is officially underway for the Power Five. On Friday night, the Minnesota Golden Gophers were defeated handily by the Iowa Hawkeyes to kick things off. But as always, Saturday is when things will really pick up.

Unfortunately, several of the top games for this weekend were postponed or canceled due to COVID-19, including Alabama-LSU, Auburn-Mississippi State, Georgia-Missouri and Ohio State-Maryland. With that being said, there are still plenty of games worth watching.

Here are five college football games you should be paying attention to on Saturday.

No. 9 Miami at Virginia Tech

Breakdown: If you like watching quality quarterbacks go at it, this is the game to watch tomorrow. Miami’s D’Eriq King is fresh off a 500-plus yard, five-plus touchdown performance against NC State last week. Meanwhile, Virginia Tech quarterback Hendon Hooker was solid (four touchdowns) against the Hurricanes in 2019.

It might surprise some to see the Hokies as two-point favorites after getting upset by Liberty last weekend, but this should be a fight. It’s the definition of a toss-up game.

No. 2 Notre Dame at Boston College

Breakdown: This is a battle between Clemson’s last two opponents. Boston College dominated the Tigers for a half, but were unable to finish the job. Notre Dame, on the other hand, handed Dabo Swinney and company their first loss of 2020.

Taking the Fighting Irish might seem like a no-brainer, but this could also be a letdown game. This one being at home for Boston College could prove to be the difference. Don’t be surprised if the Eagles end up covering that 12-point spread.

Arkansas at No. 6 Florida

Breakdown: Arkansas has been one of the most surprising teams in college football this season. After going 1-23 in the SEC play the previous three years, Sam Pittman has the Razorbacks at 3-3 heading into the Swamp. Unfortunately, Pittman will not be on the sidelines due to testing positive for COVID-19.

Former Florida quarterback Feleipe Franks will return to Gainesville for the first time since transferring to Fayetteville, and he’ll get to go against a team that he’s plenty familiar with. Will that help Arkansas pull the upset? Doubtful, but it should still be fun to watch.

No. 13 Wisconsin at Michigan

Breakdown: This will be the first time we have seen Wisconsin play since its opening game against Illinois (45-7 final score) back on Oct. 23. That makes the Badgers somewhat of an unknown, but a potential Graham Mertz-Joe Milton quarterback showdown makes this an intriguing matchup.

We still aren’t 100 percent sure Mertz suites up, but head coach Paul Chryst thinks his quarterback is trending in that direction. The Wolverines are typically a good team at home, so it wouldn’t be a surprise to see them pull the upset — as long as Harbaugh doesn’t Harbaugh.

Breakdown: On the surface, this doesn’t look like a great game. These two teams are a combined 4-8 this season, and South Carolina is fresh off two blowout losses to LSU (52-24) and Texas A&M (48-3). With all that being said, this matchup should at least be entertaining.

There aren’t a lot of SEC games to choose from this weekend with all the cancelations. But this one would be worth watching regardless. Ole Miss has the ability to score, but the Rebels also field a defense that can’t stop anybody. The over might be appealing. 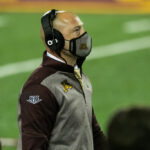 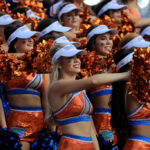