CNN ought to stop booking people on set with recently demoted tool Don Lemon if they are either smart or not down with his lies. Otherwise, they’ll humiliate him and drain whatever credibility remains at CNN.

This week, Lemon promoted the talking point that the British Empire owes reparations for colonialism and that this idea should overshadow Queen Elizabeth’s death. Unfortunately for him, he wasn’t interviewing Jemele Hill.

Rather, Lemon conversed with British royals expert Hilary Fordwich. And what a mistake that was. Fordwich quickly embarrassed Lemon on his soon-to-be-canceled program.

She responded as follows:

“And when, across the entire world, when slavery was taking place, which was the first nation in the world that abolished slavery? The first nation in the world to abolish it — it was started by William Wilberforce — was the British. In Great Britain, they abolished slavery. 2,000 naval men died on the high seas trying to stop slavery. Why? Because the African kings were rounding up their own people, they had them on cages waiting in the beaches; no one was running into Africa to get them.

“And I think you’re totally right. If reparations needs to be paid, we need to go right back to the beginning of that supply chain and say, ‘Who was rounding up their own people and having them handcuffed in cages?’ Absolutely. That’s where they should start. And maybe, I don’t know, the descendants of those families who died on the high seas trying to stop the slavery, those families should receive something too, I think.”

Now, look at his face. He’s stunned that someone would dare dunk on him in front of 200,000 viewers:

This is why CNN can’t put smart people or people not down with his lies on air with Don Lemon.

That video is why CNN has rejected the idea of booking opposing voices on set with shallow pundits like Don Lemon, Alisyn Camerota, and the also recently-demoted Brianna Keilar — they cannot defend the hysteria they spew.

Misreporting the facts about Trump-Russia, the vaccine, Covid, racism, and violence work only so long as there’s no one at the desk to correct the host.

So, we expect a short guest list to emerge for the new CNN morning show. We are thinking mostly professors, New York Times journalists, Cari Champion, and Maggie Haberman types. 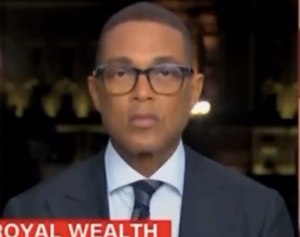 That’s the look of a man who should have been fired but got a chance to fail in one more time slot.