The Dallas Cowboys continue to be a complete disaster.

During a recent conference call, defensive coordinator Mike Nolan somehow got Tabasco sauce on his finger and then accidentally touched his eye with it. The entire call had to be put on hold as a result.

“We all know the Cowboys have been an unmitigated disaster so far this season. And I argued yesterday that it was probably time for the Cowboys to start to think about maybe trying to make a play for Trevor Lawrence. Instead of bringing back Dak Prescott, maybe you just go ahead and blow up the entire coaching staff, acknowledge that you have some good young talent, but as you sit at 2-5, you are not very competitive. And in fact, your team, if you go look at the games that you have won, arguably, you’re incredibly fortunate to have won both of those games.

“But I think you have to just tell a lie here. If you have a scheduled press briefing with your defensive coordinator, and I swear when this came out, I mean, you can’t even make it up. There was a conference call scheduled with the Cowboys defensive coordinator, Mike Nolan, and it was put on hold, and I swear, this is according to Clarence Hill, this is not actually a made-up tweet. It was put on hold because Nolan got Tabasco sauce on his finger, and then it got in his eye.

“You know, things have gone awry in a big way in Dallas when your defensive coordinator can’t even avoid putting Tabasco sauce on his finger and having it get into his eye. That is where we are. If you are a Dallas Cowboy fan, things have gone so far off the reservation that your defensive coordinator is getting Tabasco sauce in his eye. Imma be honest with you, I saw this tweet ,and I thought, ‘There’s no way it’s real. There’s no way that Cowboys can have this much idiocy inside of their franchise right now. This is somebody trying to trick me.’ And so I went and looked, and no, it appears to be 100% right.” 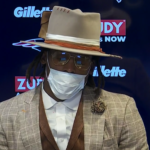