One of the many storylines from Sunday’s Buccaneers blowout win over the Chiefs was the back and forth barbs between Chiefs defensive back Tyrann Mathieu and Bucs QB and Super Bowl MVP Tom Brady.

As the game was slipping away from the Chiefs in the second quarter, Brady was picking apart the Chiefs secondary, and it seemed to be killing Mathieu watching it happen right in front of him.

After a score to Antonio Brown that made it a 21-6 game with six seconds left in the first half, the two star players could be seen going at it verbally. After the game, Mathieu claimed that Brady said some not so choice words to him.

“He called me something I won’t repeat,” Mathieu wrote in a since-deleted tweet, “but yeah I’ll let all the media throw me under the bus as if I did something or said something to him.

“Go back to my previous games against TB12 I showed him nothing but respect. Look at my interviews about him… I show grace.”

It may seem like crying over spilled milk since Mathieu and the Kansas City secondary had no answers for Brady, and making that type of accusation is tough to prove, despite there being tons of cameras following players every move in the biggest game of the season.

Mathieu seemed to lose his cool after the Brown touchdown, and he could be seen on the bench still jawing away, clearly upset about the fact that the Chiefs were heading to the locker room down 15 points.

Here’s the screen grab of the since deleted tweet from Mathieu claiming Brady called him something that can’t be repeated. 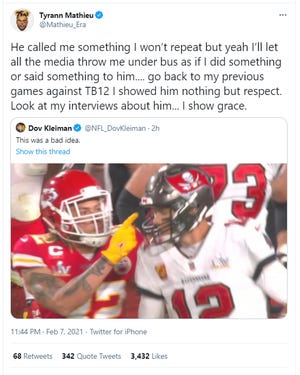 Mathieu finally seemed to settle down somewhat after the game and even changed his tune to say that the back and forth with Brady is simply part of the game.

“It’s football,” he said. “Guys are gonna go back and forth.”

You can see Mathieu’s postgame press conference below.