It was a bad day for Adam Schefter on Sunday NFL Countdown. Not only did he get crushed for teasing big COVID news on Twitter that he would break on Countdown only to have that backfired on him, but he also had to admit ultimate defeat in breaking the Patrick Mahomes extension news.

Countdown did a feature on Katie Camlin, the liquor store employee credited with breaking the big news and the Chiefs even sent over a gift to honor her — a bottle of Dom signed by Patrick Mahomes and Chris Jones.

“Katie, we had one bottle left and figured you would appreciate it most,” Brett Veach, Chiefs general manager, wrote on a note with the bottle.

“I cried,” Katie said of her gift. “I will treasure this absolutely forever.”

It was bottles of Dom that a Chiefs employee was purchasing in Katie’s store when that employee let it slip it was for a “big signing.” The rest is history. Katie tweeted the news that it was probably a Mahomes signing, the tweet took off, she deleted the message thinking it might get her fired, but the world officially had the news in screenshot form.

Now it’s Katie with her cherished bottle of Dom, a Super Bowl to never forget and Schefter’s getting roasted. What a day for the Kansas City liquor store employee. Not to go all Karen Rovell on you guys, but a 2008 bottle of Dom goes for about $200, but Katie’s not selling this gift of a lifetime.

"I beat Schefter!" 😂@AdamSchefter catches up with the accidental insider who broke Patrick Mahomes' record-breaking contract extension before he did. pic.twitter.com/kY8AHODSKp 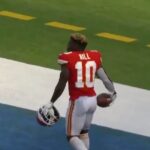 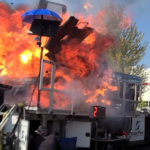