I want you guys to close your eyes and focus. Think of some of the biggest d-bags you’ve ever come across in your lifetime. I’m talking the biggest self-centered, self-important assholes out there, sucking down Big Gulps® of oxygen only to exhale a special brand of assholishness. Now imagine those same people holding press passes for sporting events.

That brings me to Tuesday in San Diego where the Padres were hosting the Cubs in yet another random June baseball game between a couple of second-place teams having nice seasons. Chicago Tribune writer Paul Sullivan, who has put in 39 years for the newspaper, was in the press box doing what baseball writers do before games. He was busy prepping a game story and a report on David Ross not judging Cubs players who haven’t received a vaccine shot.

Batting practice was taking place. Petco Field was empty. And then Paul went full asshole Big J on social media where he really let the Padres have it for allowing a few fans (do I count three?) step down into the press box to see the beautiful field and take a few photos.

“The [Padres] allow fans to invade press box to take photos during work. So lame,” Sullivan tweeted and was soon backed up by his former Tribune Big J buddy Phil Rogers who piled on. “Horrible invasion of privacy but teams/MLB see media’s work space as real estate that can be sold/exploited,” Rogers tweeted like a complete douche. 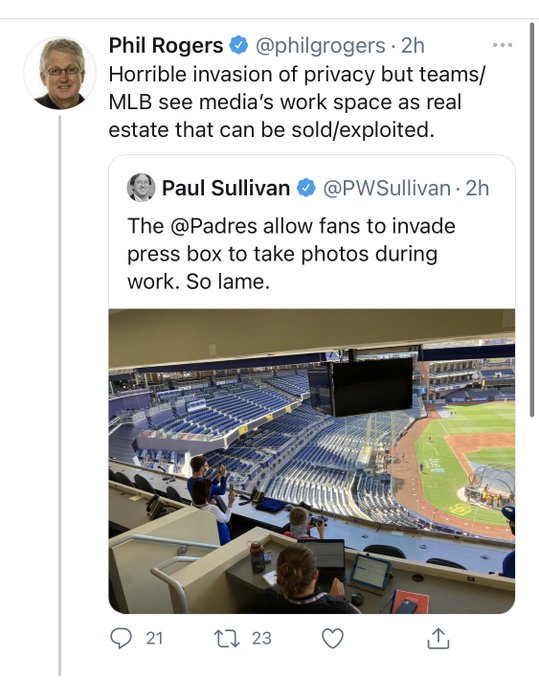 As someone who has spent a few years analyzing these guys from the massive Indy 500 press box to Super Bowl Radio Row, to Triple-A baseball press boxes, to the bars where they drink after work, let me just say they’re as big of assholes as they come across. I’ll give Paul credit for being so open and honest here. This is the Big J world they live in, where a few Padres bros walking around a press box can ruin their day, yet they’ll pop open a laptop and work in a noisy hotel lobby bar and suck down five drafts like it’s nothing.

Let’s put things in perspective here: Paul’s lucky to even be working in that press box for the Chicago Tribune. That paper could slice Paul’s job tomorrow, and the world would go on without missing a beat.

Suck it up, you douches.

I hear you Phil but reporters in the clubhouse are working, or at least should be. Loitering happens when players make themselves unavailable. https://t.co/SzzTXQn8Et

Hey, some of those press box tours get pretty rowdy. And yeah, at this point I’m sorry I spoke up for @PWSullivan and the rest of my ink-stained brethren. I yield the floor. https://t.co/BE6P8neure

The Yankees spent $1.5 billion in tax dollars on a great stadium but forgot the press box windows. It's cold!!! Just saying.

This is an oversimplification, admittedly, but the world was a better place when they served beer in the press box. https://t.co/eKXLp3dyj6

Man, imagine getting work done when the Three Stooges is on the press box TV!