I didn’t set out to be a travel columnist. While this is only my second column focusing on tourism, I feel like I’m emerging as the Conde Nast of the ever expanding OutKick universe. Full credit to my bosses at Fox who asked if I could write weekly on top of hosting OutKick 360 weekdays from 3-6pm EST and have given me no guardrails on what I should be writing. “Write what you care about” has been the consistent theme. I’m thankful for that level of autonomy. So, this week I happen to care about a recent trip to the small town of Burwell, Nebraska and how it made me feel more in touch with our great nation. 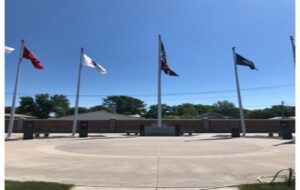 Every summer, my wife and I head to Tilden, a small town in Eastern Nebraska where she was raised, to visit her parents and allow our two young daughters to experience life on her family’s farm. There is horseback riding, swimming in a makeshift swimming pool created out of a stock tank used for watering animals, and spending time with cousins. It’s not unlike a lot of memories you may have of your childhood and visiting “Grandma and Grandpa’s house.” What we don’t consider in our younger years is what life is like for mom and dad on these trips. For this dad, it consists of participating in activities with the kids like I’m 10 years old again and physically paying the price for doing so.

I also spend a lot of time in my in-laws’ den reading, watching documentaries, or the occasional “Seinfeld” re-run when I’m tired of stimulating my mind. When I glance social media, I see friends on trips to exotic beach locales in Mexico or Central America or drinking at some famous European bar. My summer vacation is very different from those. But I thoroughly enjoy it nonetheless. I enjoyed it even more when I decided I wanted to hop in the car and see a little more of Nebraska on my latest trip. So, my wife and I drove 95 miles west into the Sandhills of Nebraska to the town of Burwell.

During my last trip to Nebraska during Christmas, I was struck watching Tom Rinaldi’s excellent “All-Madden” documentary. Specifically, how John Madden would take time to stop in small towns across America while traveling in his “Madden Cruiser” and how this made so much of America feel even more connected to their favorite football personality. But what hit me the most is how it made Madden feel about his country. Seeing different walks of life in different places can give even the hardest of hearts a sense of community and understanding. And I’m not saying Madden’s heart was hardened. It’s clear watching the documentary that the man’s passion for life was abundant. But taking time to slow down and stop in a town that may be very different from one’s own helped add to that passion. So while a day trip to Burwell, Nebraska or any other small town in America may seem foolish to the overly cynical, it can actually be quite rewarding.

We started our trip by grabbing coffee at a great local spot called The Hub which serves up any coffee drink you can fathom as well as hot dogs, polish sausages, and ice cream. There were two high school girls working the counter and one was wearing a Burwell Longhorns t-shirt while a third high school girl was being interviewed by the owner: a thin white- haired man that appeared to be in his late 60’s. “It must be very exciting moving from Lincoln to Taylor, Nebraska (population 207),” the owner said sarcastically. I immediately felt right at home. 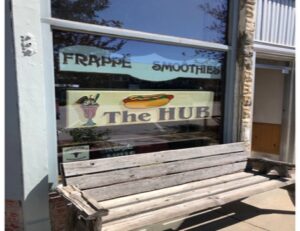 Walking around the town square with our coffees, I felt the urge to go into every store or restaurant we passed. I’m sure as I walked around snapping pictures with my phone, some of the locals thought we were outsiders trying to buy up their local establishments to put in a Wal-Mart. But even if they felt that way, I never would have known, because everyone greeted us with a wave and one younger man even asked if I needed help with anything. And not in a suspicious way. He was legitimately trying to be helpful to his fellow man. It was as refreshing as my iced English Toffee Latte from The Hub.

Our next stop was a short 10-minute drive to the Calamus State Recreation Area on Lake Calamus which offers “some of the best sandy beaches you can find in Nebraska.” It was beautiful but one can only stare at a lake for so long without anything else to do, so we headed back to town for lunch. 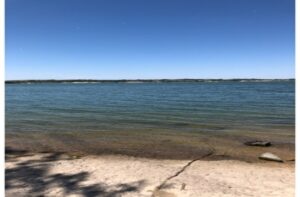 We stumbled upon a great little pizza joint just off the town square called Pizza Palace. The establishment gives you the option to order your own pie off the menu, including something called the “Max Wilson,” or feast on their lunch buffet. We chose the buffet. The salad bar had your typical set-up along with potato salad and a couple of Nebraska staples: macaroni salad and cherry crisp for dessert. The pizza was good and the company was even better. Seated across from us was what appeared to be the town dentist chopping it up with some local farmers and behind us were two women wearing scrubs. I’m sure people were curious about the random outsiders but no one said a word. 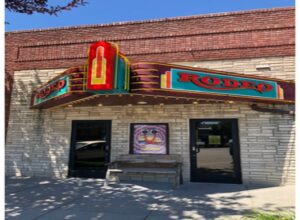 After lunch, we took the scenic route home, traveling more than 40 miles on a gravel road. We passed small farms, big ranches, and an even bigger sky. The trip excited me in a way I wasn’t expecting. The size and potential of this country overwhelms me at times but I try to never lose sight of the fact most are just trying to do the best they can where they can and that there can be a common bond that unites us. I’m personally challenging myself to visit at least three new small town squares a year to stay engaged with different parts of this great land.

I’m asking the question: “What Would Madden Do?” and answering by hitting the road.

I have a friend who takes his family to a different state every year and explores. I love this plan. Sure, Cabo is great, but just wait until you try the meat lovers’ pizza in Burwell.

Now here’s the call to action. I’m asking you to email me at Chad.Withrow@Outkick.com with a small town you’ve visited lately or even your hometown. I want suggestions on where I should go, what I should see, and where I should eat. I’ll include some of these emails in a future OutKick piece. Please and Thank You.

Chad Withrow is co-host of “OutKick 360” which can be seen weekdays from 3-6pm ET on the OutKick Network and heard across their radio network.