Eagles quarterback Carson Wentz played really poorly in Sunday’s opener against the Washington Football Team. Wentz was 24-42 for 270 yards (just 6.4 yards per attempt), with two touchdowns and two interceptions. He also fumbled twice, losing one of them. To compound matters, it’s now his fifth year in the league, and he still hasn’t learned when he must throw the ball away — he took eight sacks that compiled 62 yards of losses.

Look how long he held the ball here:

Everyone knows I think @cj_wentz is spectacular-this is the first play I show him tomorrow. He’s too good. He’s too experienced. He’s too mature to let this happen-
This is sack #2 in game

YOUR ORG NEEDS TOU TO GET RID OF THIS PLAY—TONIGHT! pic.twitter.com/JLCLpTXqYO

Look, I get that Philadelphia was without three starting offensive linemen, lead running back Miles Sanders, and top receiver Alshon Jeffery, but Wentz signed a four-year contract for $128 million and when you’re getting paid like that as a quarterback you have to be good enough to cover up for some shortcomings.

While the Eagles are effectively on the hook for Wentz through next season, after which they could bail without owing him too much more guaranteed money, Jalen Hurts is looming if Wentz does not start to play better. The Eagles can deny this all they want in the next couple weeks, but they spent a second round pick on Hurts this year when they knew wide receiver was a glaring hole on the team.

Wentz will get several weeks to right the ship, but if we’re at the point in the year where you are lining up Halloween costumes and things haven’t gotten better, the whispers about Jalen Hurts will turn into shouts. 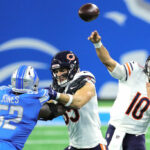 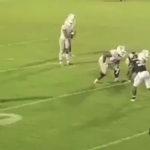