I’d gone approximately a month with very little hitting the email inbox over a weekend. That all changed this weekend. You guys were hammering away with hurricane coverage, football material and random emails checking in. I’m getting random Screencaps suggestions, which is tremendous. That’s incredibly important heading into football season.

Guys, I have two eyes. If Screencaps is going to continue to be the best damn morning post on the Internet, we have to work as a cohesive unit this fall. It’s all hands on deck. If you see something, say something. By now, you know what works in Caps. Scroll down to see what Joe E. in Colorado sent Saturday night. He’s firing off emails at 10 ET on a Saturday night. That is EXACTLY how Screencaps MVPs operate.

He didn’t contribute Screencap material, but my dad was on the phone last night making sure I saw Patrick Cantlay absolutely bulldog Bryson DeChambeau at the BMW. That was a complete bullying incident. Imagine what was going on in DeChambeau’s head as Cantlay just kept going.

Dad also wanted to know whether I saw Ohio leave so many runners on base in the Little League World Series. Yep, I watched five innings from the pool. This isn’t the time of year when you watch sports in passing. This is when you better be dialed in. I knew my father, 66, would quiz me on the LLWS action. I could’ve turned on Yacht Rock and ignored the TV, but then I would’ve been useless during the post-game phone conversation.

After dropping off my mother at the airport Sunday, I mentioned in no certain terms to my wife that it was time to hunker down. There was that mutual understanding as we drove by the famous MacQueen’s Apple Orchard on the Ohio Turnpike. Soon, wives will drag their husbands to pick apples on Saturdays while college football is raging across this country. My wife understands sacrifices have to be made, and she’ll have to pick between apple orchard day and pumpkin patch day.

And we have to go very early on a Saturday, but only if there’s not a huge Fox noon kickoff.

• I want you guys to see what Screencaps reader Kevin McKinley and the staff at Treetops resort in Gaylord, MI are up to. Kevin’s team is fully prepped for the incredible Folds of Honor Foundation charity tournament that will start Thursday and run through the weekend. Yes, I’ve spent most of the summer singing the praises of this place, but there’s a reason for that. They just go above and beyond for the community and for those who are spending good money for a golf experience. I can’t say enough about the place…and I’ve paid for every round of golf I’ve played there. This isn’t #sponsored.

Fresh coat of paint on the range at Treetops honoring those that have laid down their lives for a friend! John 15:13….

I am a big fan of your work and look forward to reading your work. I live in Marana, Arizona which is 25 miles outside of Tucson. Recently, when you asked about what brings someone joy that got me to thinking. The little things in my life bring me the greatest joy. My wife, Silvia, bakes cakes and when we deliver them to people, hearing them say, “wow, that’s amazing” or “how beautiful” that brings me joy. (I’ve attached a picture of one of her masterpieces, her “Queen” cake).

Coaching my son, James this fall season for fall ball and seeing him continue to love the game of baseball, that brings me joy. Seeing my daughter, Sophia, attend her ballet class every Saturday with her friend Bella, and seeing Sophia smile, that brings me joy. Finally, being able to say I am an American and how fortunate I am to live in the greatest country this world has ever seen, brings me joy. All too often, we get stuck in the “rat race” called life, it consumes us all. Yet, it is important to stop and think about all the blessings we have as Americans. Thanks for your daily dose of humor and wit. 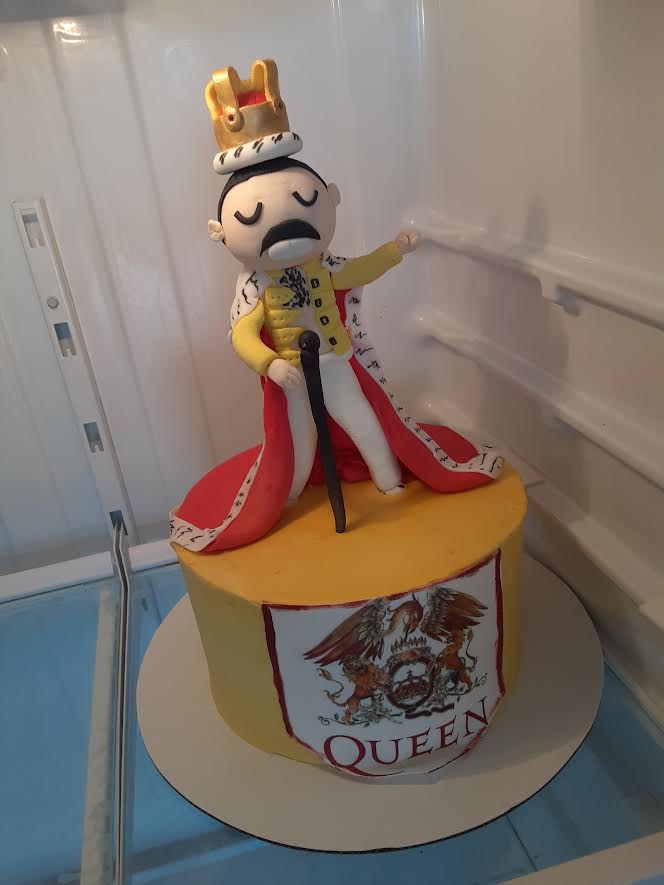 • My goodness, that’s an awesome email from Jose. What a way to start a Monday. How about something so calming like watching a daughter attend ballet class. Great stuff, Jose. Now I need to commission Jose’s wife to make a TNML cake.

Just checked in to the latest report and your line “I’m beginning to wonder the last time our friends in Utah have mowed” jumped out to me.

It is true that the drought is still having an impact although it has rained a couple of times, finally. Recently, there’s been some family vacations and a few more work trips that have wreaked havoc on my desired TNML schedule. As a result, there’s been a couple of 2 week spans between cuts lately, but the drought kept the grass at a manageable height.

Unfortunately, I don’t have a picture but yesterday was an accurate depiction of the last few weeks. I got a call on Wednesday requesting me to work in Green Bay Friday. Because I had to fly out Thursday I had to settle for TDML. So, I loaded Emmett up in the backpack and we took care of the yard to free up my wife to focus on homeschooling the other 4 kiddos. (First week of school and one-year-olds aren’t all that helpful with homeschool duties)

We got it all done in time for me to get cleaned up and make my flight.

I’m still loving the TNML family. Keep up the good work everyone!

No mowing pic but Emmett did “help” me change a light bulb on Thursday. 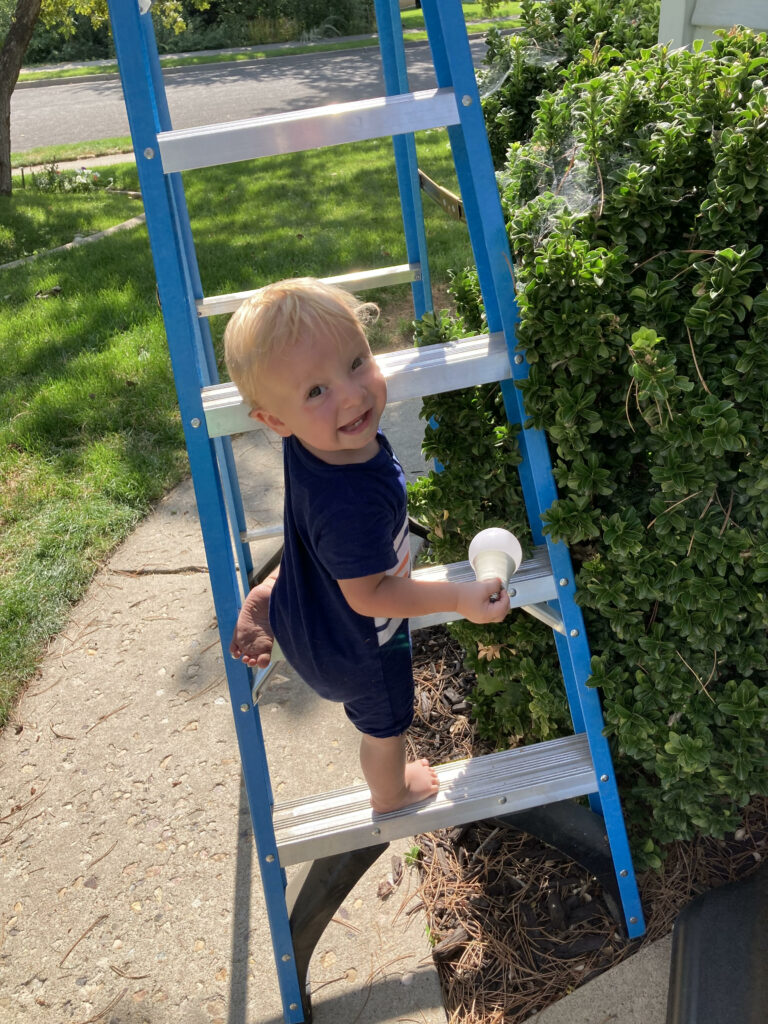 • And finally this morning, I wanted to make sure this message from Raleigh J. in Alaska made it into today’s post:

Alaska is starting to ease into a long 7 or 8 months. Thanks for giving us (me) something to read and give us (me) a feeling of community every morning before we (I) explore the news after we’ve (I’ve) checked out for the evening. BIG Thanks for putting the ExploreAlaska Instagram posts on screencaps. I hope as many in our community come up to Alaska for a week and just explore. As a lifelong Alaskan, if any of you in the community are coming up, at any time of the year, I’ll help you out as best I can.

• And with that it’s time to get this week rolling. It just feels like it’s going to be a great one. Buckle up.

Shohei Ohtani of the @Angels is the 3rd AL player with 40+ home runs and 20+ stolen bases before September.

Congrats to Patrick Cantlay. What a performance. pic.twitter.com/6Vt3Xd6xYt

Screencaps reader Joe E. in Colorado writes: "Ever seen an assistant coach look like the lead for an 80's hair band? I gotta find out who this is!" pic.twitter.com/6fVYyj2B6x

Coach, how is coaching in Dallas different than in Green Bay? pic.twitter.com/bGIBAVDyjo

1. Ref calls Safety but gives incorrect “loss of down” signal.

Can’t they even be real with the weather? pic.twitter.com/slAjNRgNlH

Britney helped make prom one to remember in 1989 when her date sparked amazing side conversations among her classmates such as “He’s totally, like, at least 33,” “I actually think that’s a Confederate soldier tuxedo,” and “Are we sure that isn’t Rafael Palmeiro?” pic.twitter.com/qsJfCdKVHe

Four larvae were discovered in rice arriving from Saudi Arabia at @Dulles_Airport. They were later identified as khapra beetles, one of the world’s most destructive pest of grain products and seeds. Our best defense against destructive pests is to prevent their entry into the US. pic.twitter.com/E6LUXpRxmE

We rarely post fight videos but it's important that everyone understands Tacos El Gordo-related violence will not be tolerated. pic.twitter.com/nUMmtQDzYm

The Majestic White Moose!🦌
According to MNRF the white moose population in the world is about 50, very rare to see . pic.twitter.com/rbFSZFf3Cq

Two beautiful photos from the area courtesy of tonight’s storms. Thanks to Rebecca Padula in Bloomville and David Brinegar in Fayette. https://t.co/7AUuQJLQ3v pic.twitter.com/3BX22t9V4K