As a fan of Twitter fights and someone who has gotten into a few (and won), I have to say that the Candace Owens-Cardi B fight this week was as good as any non-heavyweight boxing match in the past 12 months.

Like any good showdown, the country immediately rooted for a rematch. While the sequel is never as good as the original, this is still worth a view.

After exchanging blows, Cardi B scrubbed her tweets, notably those of doctored photos about which Owens threatened to sue her.

Cardi B denies she deleted the tweets out of fear, that instead the feud just got boring.

Actually I deleted all the tweets between us from the beginning because my platform is for fun and entertainment.The tweets between me & you was not entertaining anyone .It was getting boring .Get a life Candy it’s been two days https://t.co/OV0XAozqGL

You can read through the full blow-by-blow here, but in short, Cardi B quote-tweeted a photoshopped tweet designed to look like Owens announced that her husband had sex with her brother. 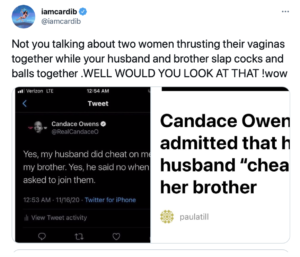 “FYI I DO have a brother, a private citizen, who you are slandering right now with this photoshopped image that you are now publicly claiming you saw tweeted in real life,” Owens responded.

“I won’t stop until I’m the CEO and chairman of that WAP,” Owens concluded. I’ll leave with that.