Search
Cart 0
Menu
Follow us
Search
Cart 0
Total180 Oklahoma State running back Chuba Hubbard’s threat to boycott Oklahoma State raised a couple of questions I’d been pondering. Will American sports ever be a unifying cultural force again?  Or has the Colin Kaepernick Woke Movement permanently polarized games that used to bring us together across political, racial and economic lines? I’d never heard ... 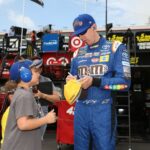