It has been a rough Sunday for Cam Newton and the New England Patriots. The former No. 1 overall pick has officially been benched and replaced by another former Auburn quarterback, Jarrett Stidham.

The decision to make the move came with the team down 30-6 against the San Francisco 49ers. Newton had fewer than 100 passing yards and threw three interceptions in the 33-6 loss. He now has seven total interceptions on the season and only two touchdown passes.

The former Carolina Panther started the season off with a bang before a run-in with COVID-19 sidelined the quarterback for a couple of weeks. Since he’s been back, Newton has been a different player, and the Patriots are now looking down the barrel of a 2-4 start.

The 49ers quarterback Jimmy Garoppolo had two interceptions of his own, but he averaged 11.1 yards per attempt and had a run game to help relieve some of the pressure. San Francisco’s rushing attack had 193 yards and four touchdowns on only 37 total carries (5.3 yards per attempt).

The Patriots, on the other hand, finished with only 94 rushing yards on 22 carries (4.3). Cam Newton accounted for 19 of those 94 yards before being benched.

Here is the latest interception that ultimately got Newton pulled. An inaccurate pass deflected off the finger tips of wide receiver Julian Edelman and into the hands of Jamar Taylor:

Following the turnover, head coach Bill Belichick had a quick word with Newton on the bench. Stidham was then seen warming up, and he entered the game for New England soon after.

Stidham completed six of his 10 pass attempts for 64 yards and an interception.

This could be a temporary change to finish out one game, or it could be long-term arrangement. We will have to wait and see what happens.

In other news, Tom Brady thrived with the Tampa Bay Buccaneers today. He threw for 369 yards and four scores in a 45-20 victory over the Las Vegas Raiders, moving the team’s record to 5-2 on the season. 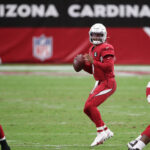 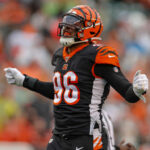