INDIANAPOLIS –  We are three days away from the College Football season coming to an end at Lucas Oil Stadium with a bang. The mood around the city is one of nervousness, hoping that the rematch lives up to the hype of the first outing. Going into that game in December, the atmosphere around Atlanta at the time was on fire. The television networks had done a fantastic job of building up the colossal matchup and you didn’t have to worry about viewer fatigue.

Now, the folks buying television ads are hoping that viewers will buy into the hype, just one more time. Talking with some folks around Indianapolis over the past 24 hours, the conversation always gets back to one point: We know what we’re getting, let’s just see who executes this time. This sentiment pretty much sums up what to expect on Monday night, with Georgia looking to finally take home the championship that’s been staring back at them for a number of years. Can Georgia finally do it? The networks are sure hoping so, or at least have a tight game heading into the fourth quarter.

It’s incredible to see how much work has been done around the city to showoff the CFB Playoffs. Everywhere you go in this town has some kind of logo, even around the campus of Butler University, which is around eight miles from the stadium. While talking with a colleague in business, we were floored by the amount of money that has to have been spent on the branding and location setups. Even the small things, like the media hospitality room is something that most sports fans could only dream of for their ‘man cave’ or house. 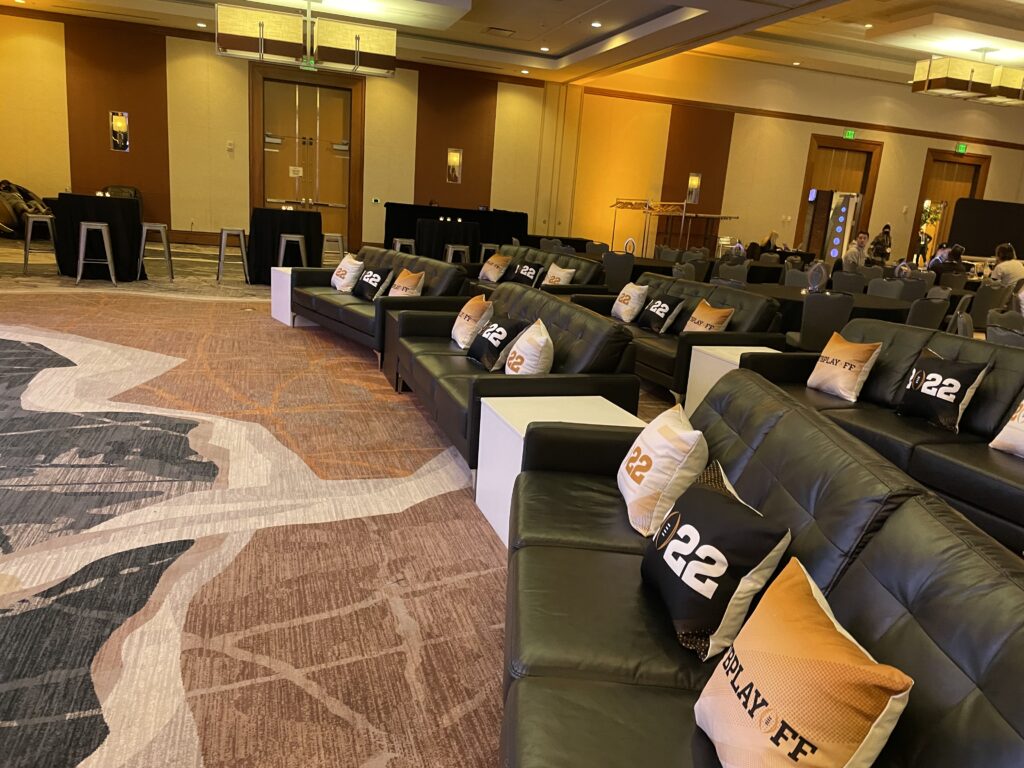 Everywhere you look, the ‘CFP 2022’ logo is present, especially on the side of the hotel. I am reminded of this every night by the huge industrial light that shines on the hotel logo, making me feel like ‘Kramer’ from Seinfeld, when his room is lit up by the Kenny Rogers chicken sign.

I spoke with a few folks last night, who told me they’ve done all they can to find different areas of discussion that haven’t been hit on yet, as they tirelessly worked until 3:00 am getting the interview rooms and work areas setup. They understand a lot is riding on this football game living up to the SEC Championship hype and not having viewers outside the southeast tune out the buildup. I think I can say with 100% certainty that most college football fans are going to tune into this matchup on Monday, even though they’ve seen how the first screening went. It’s the game we love, and no matter who is playing, we would watch a Division II championship over some other sports. So, this is what television executives are counting on, come Monday night. 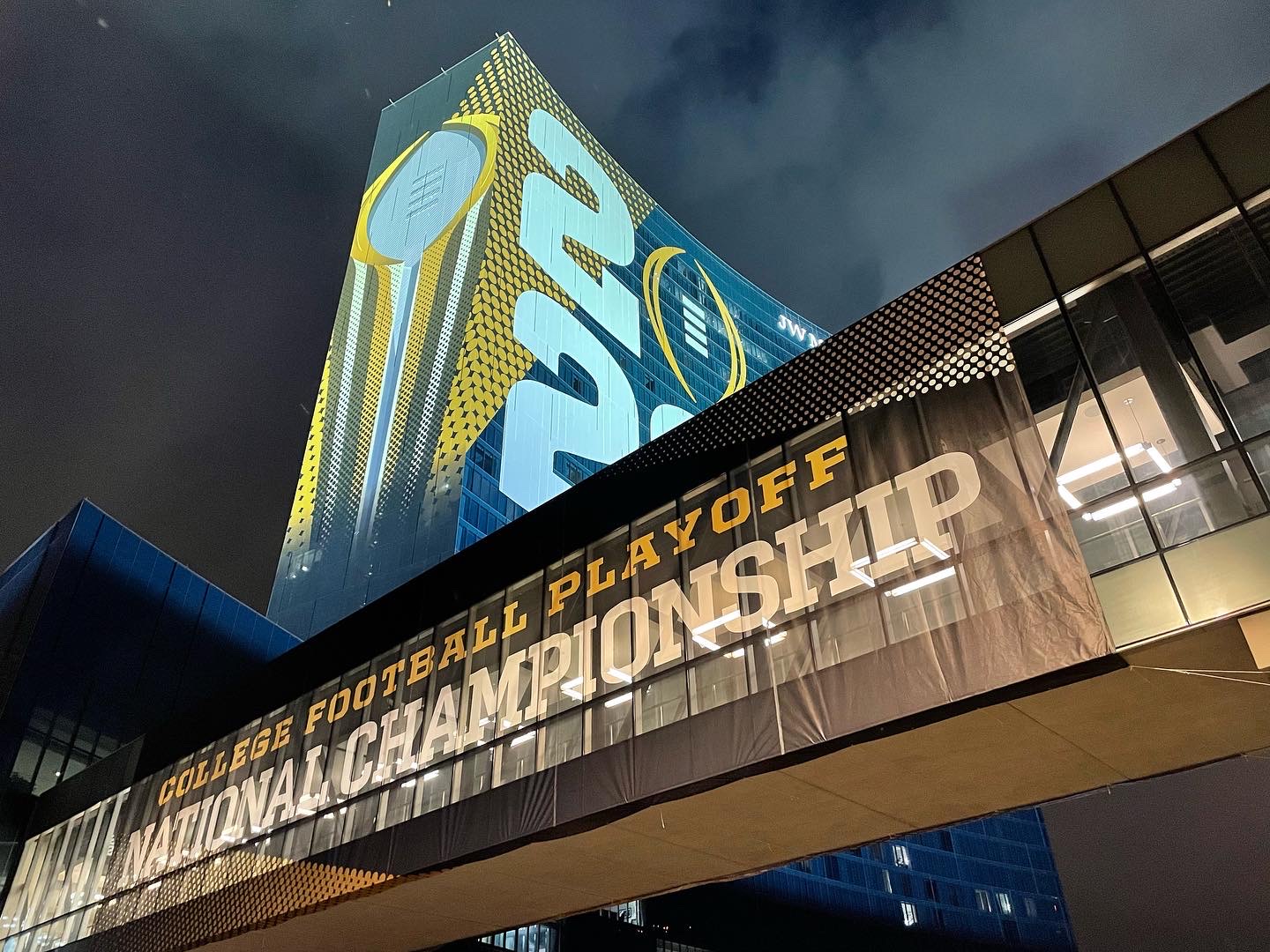 Outside of the internal build up to the game, the on-field product has been a fiery topic since I arrived in Indy. How are these coaches going to scheme against a team they just faced in December? It’s pretty simple, there will be different blitz packages on defense and a few new looks on offense, that could catch the other team sleeping. But outside of the coaching noise, most agree that this game will depend on if the Georgia defense can live up to the billing one more time. From Nakobe Dean, Jordan Davis, Roman Smith and others, this Bulldog team showed last week why they finished the regular season 12-0. They created chaos and Michigan didn’t stand a chance after the first half was over. As one reporter mentioned to me, “that whooping last week seems to have ignited the Georgia defense again, after it felt like they forgot who they were after the SEC Championship game.”

The excitement level for this game seems to not be a problem for fans of Alabama and Georgia, though ticket prices might say the opposite. According to StubHub, it would’ve cost you more to attend the first meeting in Atlanta than it will on Monday night. Tickets were starting off above $400 dollars for the initial matchup, but are now just $353 a ticket to get in. Thats a dramatic drop in what some were thinking just last week, especially for a National Championship. The demand has dropped and so have the prices. So if you’re still thinking about making a trip to Indy, at least it won’t cost you as much to get in, compared to Atlanta.

Thank goodness this game is being played indoors, since it’s a nice sixteen degrees here in Indianapolis. 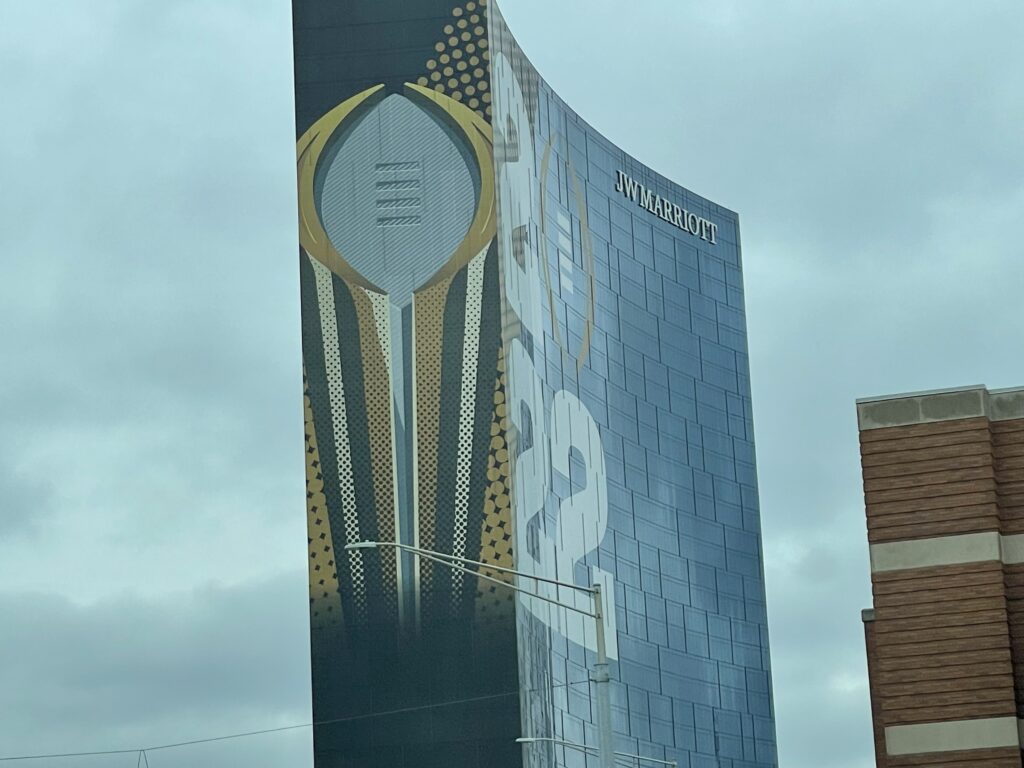 But other than the freezing temperatures outside, the fight for the National Championship should be a warm does of physicality. Other than the fight in the trenches, the quarterback play has been the leading topic around the media workroom. Can Stetson Bennett duplicate his performance from Miami? Will Bryce Young be able to make the plays down the field, with Georgia’s defense coming at him?

What we witnessed from Bennett against Michigan was a thing of beauty, throwing for over 300 yards and 3 touchdowns. His command of the offense shown up all season, which is why the staff has continued to show so much confidence in him after the first meeting with Alabama. As for Bryce Young, the only way you will throw him off his game is with constant pressure. The consensus is that if Georgia can’t put him on the turf numerous times Monday night, then the Bulldogs will have a problem on their hands. We’ve seen what consistent pressure on the quarterback can do against this Alabama offense, the Auburn game being a good example.

Either way, we’re all just hoping to get a good game on Monday night.

As for the buzz, the city is starting to fill up with fans of both teams, as the game draws closer and the anticipation rises. We will see what the next few days bring us, with both teams scheduled to speak this weekend.

Stick with OutKick, for coverage of the 2022 National Championship from Indianapolis.