Two Frontier Airline flight attendants have been suspended by the company for failing to follow proper procedures during a July 31 flight from Philadelphia to Miami when they taped a belligerent passenger to his seat.

22-year-old Max Berry is accused of making “inappropriate physical contact” with a flight attendant and then he’s alleged to have physically assaulted another flight attendant before he was subdued via tape until police got their hands on him in Miami.

Frontier passenger allegedly touched 2 flight attendants breasts, then screamed his parents are worth $2 million, before punching a flight attendant. Frontier suspended the crew for duct taping the passenger to his seat as they landed in Miami. 22 yr old Max Berry is in custody. pic.twitter.com/4xS9Rwvafx

As you can hear in the video, a possibly inebriated Berry made sure to drop a “do you know who my daddy is” line on the flight attendants who clearly weren’t in the mood to hear how much Max’s parents have in their 401ks.

Berry was arrested on three counts of battery for his part in the Budget Airline Brawl®. Police say the Ohio man had “several” drinks on the flight and brushed a cup against one flight attendant who was tired of his act. Berry reportedly proceeds to spill a drink on his shirt, then he goes to the bathroom where he removes the shirt and then returns to his seat shirtless.

The crew helps him try to get a shirt out of his luggage and that allegedly leads to Berry touching one of the attendant’s breasts.

• Imagine throwing out how much your parents have in their retirement funds. Baller move.

• Frontier has to immediately drop the employee suspension. You want people to work for your Greyhound of the Skies operation if they’re not allowed to duct tape drunken fools who secured $19 flights? Proceed with this suspension and see how many people line up to work these flights. 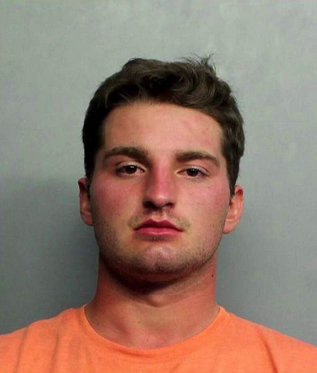