During Saturday’s Major League Baseball celebrity All-Star game, actor Bryan Cranston briefly morphed into Heisenberg, leading to his ejection from the game at Dodgers Stadium. The Breaking Bad star used a bad call from the home plate umpire to treat blue like an addict who snitched on Walter White.

After pitcher Jennie Finch (who still brings it by the way) was the beneficiary of a highly questionable called strike three, Cranston gave the ump the death stare, opening his mouth only to repeatedly utter: “It was inside!”

Not surprisingly, the umpire disagreed but had no choice to stand there as the actor – very much playing the role – kicked dirt onto blue.

Watch the scene unfold in the video below.

Bryan Cranston kicks dirt on the umpire after he calls a ball a strike 🤣🤣🤣🤣@UmpJob pic.twitter.com/UKv3rrLYVF

The Los Angeles crowd roared with approval as the country’s most famous (fictional) meth dealer continued his rant. After redecorating the umpire’s pants and shoes with plenty of infield dirt, Cranston briefly made his way back to the dugout, but only to snatch a bucket of bubble gum – though not for himself.

What unfolded next was Cranston firing the bucket of gum towards the ump, who finally had enough and tossed him from the game. Though record keeping for the celebrity All-Star game is sketchy at-best, it’s believed that Cranston is the first person to be tossed from the exhibition.

Bryan Cranston is the baseball hero we didn’t know we needed pic.twitter.com/JJb8KnLjMy

Maybe the umpire will think twice about giving Cranston the boot next time. After all, as Cranston’s Walter White character once reminded Skyler – “You clearly don’t know who you’re talking to, so let me clue you in. I am not in danger,… I am the danger. A guy opens his door and gets shot, and you think that of me? No! I am the one who knocks!” 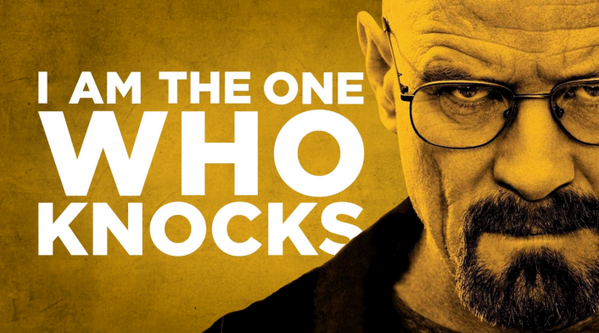