The Broncos-Patriots game, which had been rescheduled from today to Monday, is getting moved to next week per Adam Schefter:

Broncos-Patriots game is being moved to next Sunday, sources tell ESPN.

Broncos were supposed to play Miami; that won’t happen. That game is being rescheduled.

The Patriots were scheduled to have a bye next week; as Schefter said, the Broncos were scheduled to play the Dolphins. How the NFL maneuvers the jigsaw puzzle from here is anyone’s guess. Denver’s bye was originally supposed to be Week 8 and Miami’s is Week 11.

It also remains to be seen what is happening with Titans-Bills. They are slated to play Tuesday, but another Titans employee just tested positive. This game affects Bills-Chiefs, which is supposed to be played Thursday but would be moved to Sunday if Titans-Bills indeed happens on Tuesday.

It’s clearly time for the NFL to add Week 18 to the schedule so there is a buffer space for these types of events. 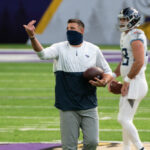