Erik Gray, a class of 2022 offensive and defensive lineman from Amarillo (Texas) High, was already getting some attention thanks to a scholarship offer from Arizona State. Gray better get a bigger mailbox after his performance Friday night in a 44-17 win over Lubbock.

The three-star, 6-foot-3, 275-pound, Arizona State recruit took a hook and ladder pitch and turned on the jets for a 68-yard touchdown.

Gray originally hit the radar of college recruiters after Southern Miss offered him a scholarship. He put that news on social media and soon ASU’s offensive analyst Kevin Mawae was on the phone to have a chat, according to 247 Sports.

“I was working out, I was at the gym,” Gray said during a 247 interview. “I told him I was at the gym. I was like, ‘OK, I’m at the gym. I’m sorry if you can hear the background.’ And he was like, ‘Even on a Saturday?’ And I was like, ‘Yeah, you’ve got to get the work every day.’ I wasn’t really expecting an offer because you stay humble. You don’t think about it too much until you really get the offer, but I was like, ‘OK, well, he’s getting to know me more and hopefully this offer comes.’ And then he goes, ‘We’d like to offer you.’

“As soon as he said that I started going crazy. I felt relieved, I felt blessed. I just felt great that I got another big offer, a big offer from ASU. I was very excited. First thing after the call, I called my mom and she was freaking out.”

Now Gray has new social media content in the form of footage that’s going to have college recruiters kicking down his door. It’s a good time to be Erik Gray. 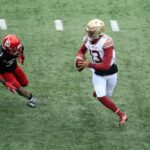 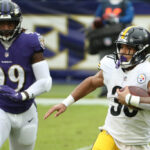