One day, the country will look back at this period as a humiliating mark on history.

The president cannot speak. Society can’t define the term “woman,” and the truth no longer matters. This is what bizarro world looks like.

President Joe Biden is making a mockery of the most prestigious position in the country. He no longer has the ability to read a teleprompter or form a sentence.

He has recreated acclaimed comedic characters:

How’s that for an eventual this day in history?

Leaks from Washington now read like satire. Except, they’re not. Aides that work closest with the president are forewarning fellow Americans that the White House floors have endangered their alleged leader.

“[Some] aides quietly watch out for [Biden]. He often shuffles when he walks, and aides worry he will trip on a wire. He stumbles over words during public events, and they hold their breath to see if he makes it to the end without a gaffe,” the New York Times reported last week.

The media would not have printed these lines two years ago. Yet, the press knows it helped elect a character in decline and is now trying to expedite his fall.

Talk about a casting decision backfiring less than halfway through the film. 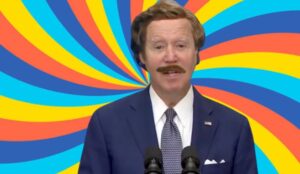 But while Biden is in the lead role, he’s not the most consequential subject in this tale. Though the self-inflicted implosion of the White House will cause present and future giggles, a pack of societal failures will draw no such reaction. The indifference to common sense is chief among them.

The truth doesn’t matter much anymore. Facts are often inconvenient in a culture driven to instill uncertainty and confusion around the most basic truths.

The truth is now discretionary and diminished, as evidenced by the response to COVID-19 — word is masks are back in the news — to the furtherance that the definition of a woman is somehow unclear.

A moment during a Senate hearing last week encapsulates this phenomenon when a UC Berkeley law professor accused Sen. Josh Hawley of transphobia and inciting violence against the trans community.

What did Hawley do? He questioned the proof that men could give birth to children:

Sen. @HawleyMO said men can’t have babies and some Berkeley professor said his comment is “transphobic” and opens people to “violence.”

Hawley cited biology, so a law professor pretending to represent a purportedly marginalized group responded by calling him a dangerous anti-LGBT bigot. Let that be a warning to fellow #science believers out there.

Speaking of the disregard for reality, the University of Pennsylvania nominated transgender swimmer Lia Thomas as the 2022 “Woman of the Year” on Friday. Thomas is a biological male who competes with a distinct advantage over females in the swimming pool.

Female teammates complain that Thomas exploits the rules and walks around naked with male genitalia in the locker room. However, newsrooms and college campuses consider Thomas’ actions heroic and worthy of consideration for “Woman of the Year.”

The most damning mark on this period is the unwillingness to oppose the normalization of such societal absurdities. That’s the difference between today and past eras.

Regardless of political affiliation, the public would have quickly quashed these ideas and cited sheer irrationality at any other time in history. But a sense of fear now looms over public discourse.

As Fox & Friends co-host Rachel Campos-Duffy told OutKick last fall, it’s not as if Americans suddenly woke up unaware of the biological differences between men and women. Instead, there’s a sweeping fear of voicing an opinion that runs afoul of the so-called politically correct.

“Most of America, I’d say 80 percent, think [Lia Thomas competing in female athletics] hurts girls. That includes Democratic women, Bobby. But because there’s so much sensitivity about how it hurts transgenders, people won’t take a public stance and say this.”

She’s right. People would rather succumb to groupthink or self-censor than say what they believe and risk a visit from the lurking outrage crowd.

Some of them are opportunists who choose to subvert the truth as a means to secure the advantages of an in-crowd member. Others stay quiet because they work for frightened employers. They know it could cost them their livelihood if they are not cool or woke enough.

That describes a wacky but weakened culture, one that has been manipulated and led down a backward reality — a culture in which children cannot go to see a Buzz Lightyear film without experiencing political messaging in the form of same-sex kissing.

People are at a loss of direction and thereby discount their better judgment. The usual power-craving suspects have seized on this vulnerability.

One day, it will startle us that a sort of creepy, Chinese-style social credit system crept into society and the country at large responded like sheep.

War is peace … senility is sanity … ignorance is strength … man is woman. Not even George Orwell could have foreshadowed this level of manipulation and subsequent response.

American culture is now a self-owning meme. Facts are ostracized from the conversation.

We shall list a series of prohibited truths, just some of the many, nonetheless:

From the assault on truth to the elevation of the cognitively diminished to the White House, this era ought to make quite a tale one day.