Comparitech filled out the U.S. map with each state’s favorite Christmas movie, based on IMDb’s top 50 most popular.

I now encourage some states to turn away: 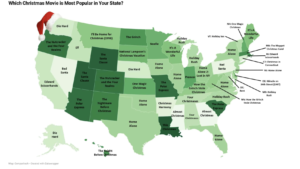 Props to the great folks of Pennsylvania. Bad Santa is fantastic. Billy Bob Thornton is my favorite Santa yet. Outside of the character Cameron Diaz plays, no one in film is as likable as Thurman Merman.

It’s unclear how The Santa Clause didn’t win more states. When it comes on, the rest of your day is done for. Yes, the sequels sucked.

Growing up, I was on team The Year Without a Santa Claus, though How the Grinch Stole Christmas was a close No. 2.

I have no comment on Die Hard, a non-Christmas movie.

OutKick VIP members, what is the best Christmas movie? Comment below: