Antonio Brown’s gone full Britney Spears circa 2008. The now former NFL wide receiver is just a barefooted walk into a gas station bathroom away from a conservatorship. But even though AB has had a circus of drama and controversy surround him for nearly a year, he still insists nothing’s wrong.

“Why every time something happens bad, or how someone reacts, ‘Aw, he’s crazy, there’s something wrong with his mental health,'” Brown asked Brandon Marshall during an appearance on I Am Athlete. 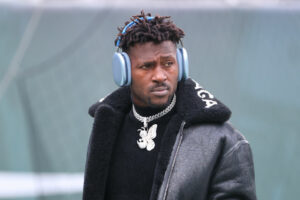 “There’s nothing wrong with my mental health,” added Brown. “Someone told me to get the f**k out of here. I’m not passive-aggressive.”

Brown was referring to his likely last NFL game in which he left the field mid-game, shirtless, because as he tells it — he was too injured to return to the game and a coach insisted he play hurt or leave.

“An NFL Super Bowl team coach told a guy on the team who’s playing hurt ‘get the f*** out of here,'” Brown told I Am Athlete.

For those keeping score at home, over the last month, Brown has walked off the field shirtless during a game, accused Bucs coach Bruce Arians of wanting him to play while injured, attacked Tom Brady’s personal trainer, had some super-fast sex, bashed Gronk and Brady, rapped a couple times, hung out with Floyd Mayweather and Kanye West and who the hell knows what else.

Nothing crazy about that.