Belgian cyclist Tara Gins says she was supposed to join a cycling team in a director position, but she now claims the job was yanked from her for doing a Playboy photoshoot and appearing in a Belgian calendar. That’s right, somehow Euro cycling has gone incredibly soft for some odd reason.

What happened to the days when Euros weren’t so uptight about nudity? I remember my honeymoon to Riviera Maya a few years ago when Euros were naked everywhere. Now here we are in 2021, and Tara’s allegedly losing her job over a magazine shoot. These are absolutely insane times.

“I had a verbal agreement to start working for a team as a sports director this year. A men’s team, where I would work with the young athletes and the elites,” Gins wrote on Instagram. “That was something that I was really looking forward to because that is the direction that I want to go in,” she continued, before going on to reveal that the job offer had been rescinded due to her sexy photo shoots. “Those were photos that don’t harm anyone,” said wrote. “Apparently, these are now too inappropriate to work with riders.”

Gins told Cycling News she received a call from the team, and it was implied she was out because of the photos. 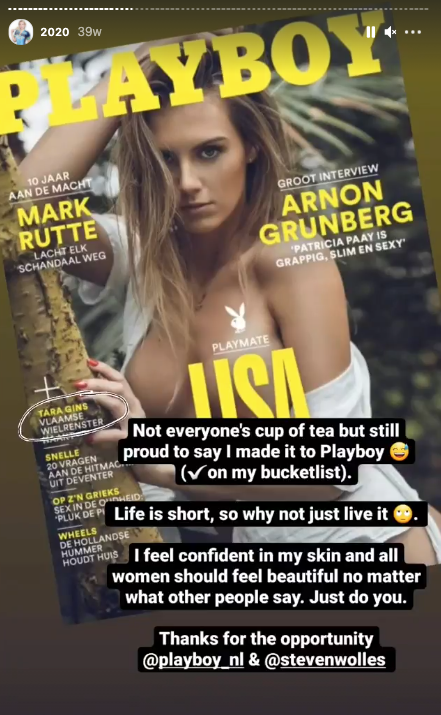 “In May last year, I did a photoshoot for Playboy and then two months later I did another photoshoot for a calendar for a Belgian company,” she told Cycling News, adding the photos were “nude but with some areas covered so it was not vulgar.”

Now Gins is left with a bigger Instagram following, but she doesn’t know what the future will bring as far as a work career. “I guess we will find out by taking one step at a time. Cycling is my passion and will forever be my passion. Sometimes we need to take a step back to make a bigger jump at the end,” she wrote Thursday on Instagram.