Baltimore strippers can officially jump back on their poles and get back to making a living shaking it for the customers at clubs across the city after Democratic Mayor Brandon Scott folded like a cheap suit when the strippers hauled him into federal court.

Lawyers for the clubs and strippers argued under the First Amendment of the Constitution that their right to free speech was being violated by Mayor Scott’s ban on strip clubs during COVID, according to the Baltimore Sun. Then, before a hearing could even be held, the strippers got the incredible news. There would be no hearing. There would be no court case. There would no longer be a COVID-induced ban on Baltimore strip clubs.

Grease the poles. Crank up the “You Shook Me All Night Long.” The ladies are back, and it’s time to get back to doing business.

“Today’s the day! Stage is finally OPEN! Private rooms are also available!” the Penthouse Club announced Friday afternoon on Instagram. “#penthousebaltimore looks forward to welcoming back our guests and friends for the show they deserve! #bottleservice is strongly recommended on weekends to ensure entry!”

The news was met with cheers across social media, as dancers, customers and defenders of the First Amendment won against a mayor who knew he was going to lose spectacularly.

A post shared by The Penthouse Club Baltimore (@penthouse_baltimore)

The Penthouse Club’s Instagram Live has spent the day featuring the dancers who are finally going back to work at the club just off I-83 in downtown Baltimore. You can feel the excitement from the ladies who don’t want a government handout. We’re talking about ladies who want to work their asses off for a living and avoid interaction with the government.

Now it’s happening. Velvet Cake is ready. So is Avery Brielle. So is Peachy Shay. It’s going to be a glorious night at a club where bottles will be popped and the Constitution will be saluted. 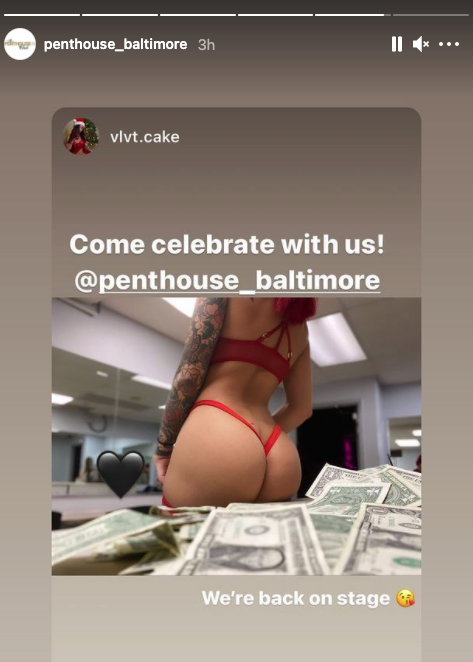