Baker Mayfield has been pulled for Case Keenum late in Browns-Steelers, as Pittsburgh leads 31-7. Mayfield was 10/18 for 119 yards, one touchdown, and two interceptions. He had injured ribs coming into the game, and there were parts of the week where his status was uncertain.

We saw something similar happen last week with the San Francisco 49ers. They were getting crushed by the Dolphins, and benched Jimmy Garoppolo at halftime. Garoppolo had been banged up with an ankle injury.

The Baker Mayfield / Case Keenum dynamic does bear a little bit of monitoring. Keenum and Browns head coach Kevin Stefanski had a nice season together with the Vikings in 2017 (where Stefanski was quarterback coach at the time). The Vikings went 11-3 in games Keenum started that season.

I’m not ready to call this a full-blown quarterback controversy as of yet. Even if they lose, the Browns are 4-2, and Mayfield is banged up. However, it’s a situation to keep an eye on. 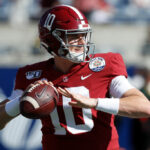 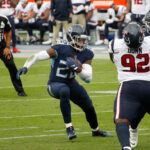