Derrick Henry might be on the injured list with a broken bone in his pinky toe, but Baby Derrick Henry from the Hueytown, Alabama 6U football program is picking up the slack by absolutely humiliating opponents on the gridiron with stiff arms that will remind you of the Titans running back.

In a TikTok video posted over the weekend by Kei’Andre Scott, we get to see Baby Derrick stiff-arm five opponents on his way to the end zone. As you can see, these aren’t just any stiff arms. This is owning an opponent. This is a performance where opposing moms want to see birth certificates. This is a performance that will end up on the desk of Nick Saban and the Crimson Tide recruiting staff.

♬ Legends Are Made – Sam Tinnesz

It’s not just the Alabama Crimson Tide who might have their future running back. The Arizona Cardinals TikTok management team took notice of Baby Derrick and have moved him right up their draft board in the 2030s.

No pressure, kid. It’s not like Derrick Henry’s high school stats from Yulee, Florida are that impressive. There shouldn’t be any issue snapping these numbers: 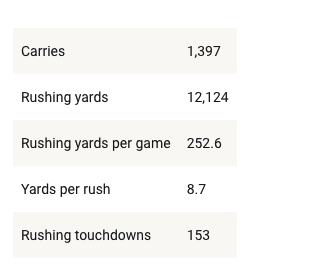