If you thought Hannibal Lecter was a nut, wait until you meet Lawrence Paul Anderson.

Make sure you sit down before you read this: According to Oklahoma authorities, Anderson was released early from prison in January. With me so far? On Feb. 9, he killed a woman, cut out her heart, took the heart to his aunt and uncle’s house, and cooked it with potatoes. Why would he do such an awful thing? To, in his words, “feed to his family to release the demons.” Anderson didn’t stop there. After cooking the heart, he then killed his uncle, badly injured his aunt, and killed their 4-year-old granddaughter.

“Anderson … cooked the heart at the Pye home and tried to make Delsie (aunt) and Leon Pye (uncle) eat the heart before he attacked them,” an Oklahoma State Bureau of Investigation agent wrote in a request for a search of the neighbor’s home.

OSBI agents say Anderson confessed and admitted he cut out the woman’s heart. A cousin of the victim says that her family is unaware of any prior relationship with Anderson.

Anderson, 42, now faces three counts of first-degree murder, one count of assault and battery with a deadly weapon, and one count of maiming. That’s a lot, but it’s still not enough.

Fine, I will say it: Lawrence Paul Anderson is one of the worst people in America. 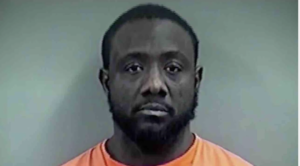 Anderson is no stranger to crime. Back in 2006, he was sentenced to prison for attacking and pointing a gun at his girlfriend. He was back behind bars in 2012 for selling crack cocaine near an elementary school, and he was sentenced to 20 years in 2017 for sneaking drugs and a gun into prison. Yet last year, Gov. Kevin Stitt commuted the sentence to nine years last year, leading to Anderson’s recent release after just three years.

“When is enough enough?” Grady County District Attorney Jason Hicks said at a news conference after filing charges, per The Oklahoman.

“We have seen ‘criminal justice reform’ in the state of Oklahoma now for several years,” Hicks adds. “We have put politics and releasing inmates in front of public safety. The goal that we have set in Oklahoma is to decrease the prison population with no thought for public safety. And that’s not fair to the people of the state of Oklahoma. And we have to come to terms with that.”

“Go tell these families — the Blankenship and the Pye families — that Anderson was just a low-level nonviolent offender. Look at what … he’s accused of doing,” Hicks concludes.

Stop letting these people out.