Once the final whistle blew on Thursday and LSU moved on to the quarterfinals, the third matchup of the season with Arkansas was on the minds of many. In their previous two meetings, the Tigers had come up short against the Razorbacks, losing both games by a combined eight points and the only difference on Friday is the manner in which they lost. The Razorbacks extended their winning streak over LSU to 3 games with the 79-67 win on Friday.

The Tigers have been that inconsistent team all season long that you’re scared to put money on because you know they could get beaten on any night. This was the case against Arkansas, trailing 29-26 at halftime, the Tigers did not score a second half point until the 16:08 mark. This basketball team is so awkward and unbalanced that it makes Alabama look coherent.

So when Will Wade picked up a technical foul in the first half, the crowd seemed to have a field day with the trash talking. Overall, the Tigers looked like a shell of themselves during this outing, not having a single double-digit scorer as of the 8:43 mark, when JD Notae slammed home a basket.

JD Notae started picking up the pace, scoring his 17th point of the game at the 7:48 mark of the second half, where at this point Arkansas led 58-42. As the fans in red started to ‘Call The Hogs’ again, for maybe the 10th time today, it was starting to feel like Arkansas was finally putting their foot on the throat of the Tigers. Notae finished with 19 points and 6 rebounds.

Au’Diese Toney had scored 16 points up until the under eight break, continuing to bring the crowd to their feet, time and time again. Toney finished with 22 points.  If it weren’t for the officials calling everything they could inside the paint, maybe this game would’ve been worse. I mean, Jaylin Williams had 10 rebounds, but only 6 points, at the 6:48 mark, meaning the Razorbacks were getting help at other positions on Friday.

As for the Tigers, Darius Days had a double-double, finishing with 14 points and 10 rebounds, while two of his teammates hit double-digit scoring.

But the Razorbacks couldn’t get away from players like Chris Lykes, who had 16 points at the 3:20 mark, while they led 69-55, with Will Wade complaining a little more to the referees about the lack of phantom calls.

Obviously this win will help Arkansas when it comes to NCAA seeding as well, while LSU looks like a team still struggling. Beating Missouri is one thing, but playing a team like Arkansas is another, which they found out the hard way on Friday.

When you shoot the way LSU did from behind the perimeter, results like today are going to happen. Also, Arkansas is just the better team. Besides the play on the court, the biggest cheer of the game came when John Daly was shown on the big screen, to the delight of Arkansas fans. 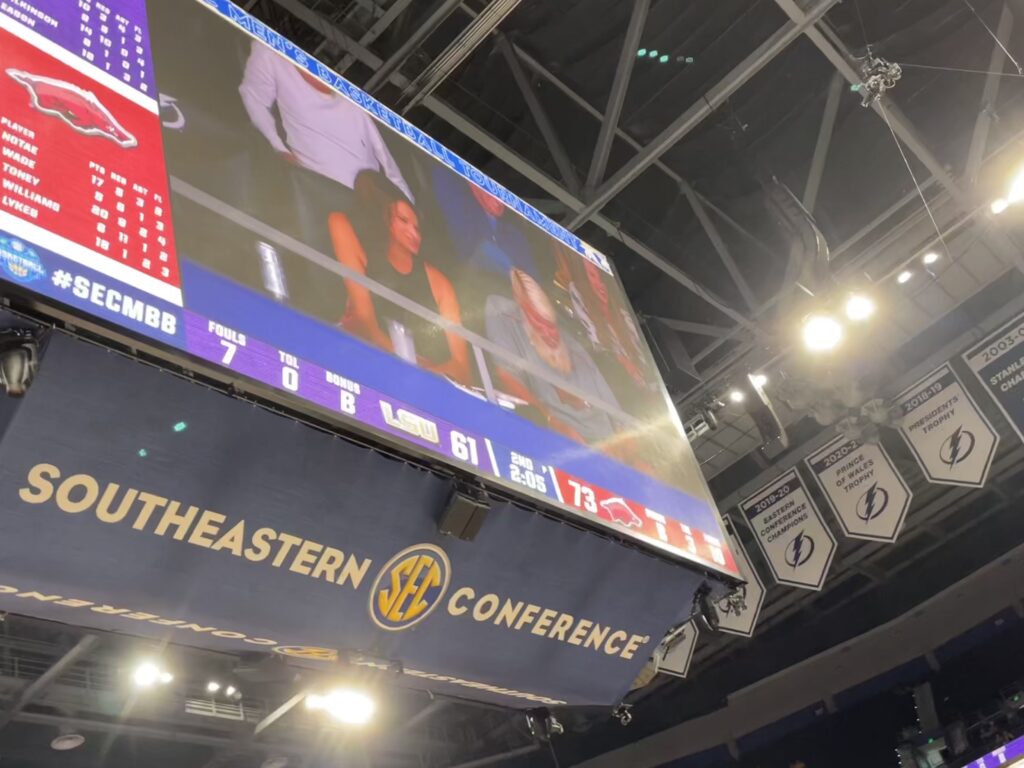 Saturday’s matchup between Arkansas and Texas A&M will be fun to watch, especially from an outside shooting perspective. You have to love the run the Aggies are currently on, but this Razorback team is very good and will tough to beat.

But that’s why we play. So, bring on a crazy game Saturday afternoon.