UPDATE: Law enforcement announced that Anthony Warner, 63, of Bakertown Rd, is indeed believed to be responsible.

BREAKING: Law enforcement is now announcing that Anthony Warner, 63, of Bakertown Rd, is the man believed responsible for Friday's explosion. He perished in the blast. No one else is presently believed to have been involved. Thank you to our federal & state partners. pic.twitter.com/PwMa1MwHvd

Two law enforcement sources confirmed to Fox News that 63-year-old Anthony Quinn Warner is the person of interest in the Christmas Day bombing in downtown Nashville. In addition, authorities say Warner is believed to be deceased from the explosion.

Saturday, the FBI and ATF searched a home in Antioch, Tennessee, which they believe belongs to Warner.

The same RV parked at the blast was shown at the home via Google Earth images. 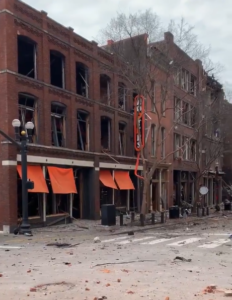 Authorities do not believe the city of Nashville is in danger.

*This is an updating story, check back to OutKick for the latest news.