The lights have been hung, your wife’s car stereo is blasting Mariah Carey and the Christmas Ales that you swore you were saving, have curiously dwindled from 12 to 2. Most importantly, your mistletoe-attached-to-the-belt-buckle joke still hits after all these years.

That’s right. We’re now less than 24 hours from Santa barreling his fat ass down the chimney with enough presents to keep your elementary school-aged kids entertained for at least 2-3 hours before they’re bored. To help pass the time, OutKick contributors Alejandro Avila, Bobby Burack, and Anthony Farris have drafted movie Santas in an effort to form the best team of Kris Kringles this side of the North Pole.

This is our gift to you – the wise man – scrolling through your phone, looking for content to occupy your eyes, instead of being caught staring at your sister-in-law’s yoga-tight butt at your Christmas Eve family gathering. 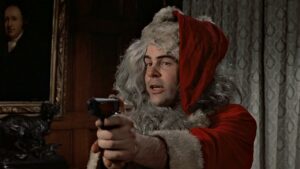 *The only rules – there are no rules. The three of us wanted to find four Santas each that would form the best team. What kind of team? Well, we don’t really know. We got into the eggnog a little early and starting drafting based on very unspecific criteria: some guys went with the best Santas to party with (weirdos, I know), others wanted the best actor or most believable jolly old Saint Nick. And some of us just based our board on the most recognizable names left on whichever Google search list we used.

**The draft order was determined in the most fair way possible, alphabetical order.

The only department store Santa you can trust. Understands the season of “getting” and scored Lorelai Gilmore.

The sentimental pick. Like so many of us, Allen, err…Santa, struggles with midlife weight gain and how to cope.

He may smell like beef and cheese, but his vibe is more jack and coke. The guy you want to have your name in the office secret Santa, so long as the Jets cover the spread. 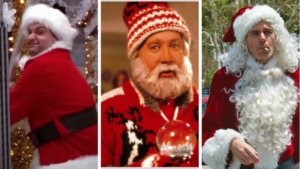 When he has time away from the North Pole, Chuck Rhoades is in the enviable position of regularly showing Wendy Rhoades (Maggie Siff) his yule log.

He spends his days cooking meth and his night’s being guided by a red-nosed reindeer.

A bad contract with the military — made in an attempt to save his workshop —  forces Santa (Mel Gibson) to load up on ammunition and protect the spirit of Christmas.

The only man to play Santa and win an Academy Award for it. Gwenn played the quintessential version of the big guy in red with a charisma and piety not seen in the modern day.

More motivator than a game day-Tebow. Asner’s Santa famously said: “Buddy, you’re more of an elf than anyone I ever met and the only one who I would want working on my sleigh tonight.”

A proven great gifter. The man once handed Henry Hill $3,200 in cash. Albeit, it was for a lifetime and he did have to turn his back on him after doing so.

Round 4, Pick 1 (Anthony): Alec Baldwin, Rise of the Guardians

With all the top prospects already off my board, I figured it was time to pull the trigger and select Baldwin. We’ll see what he does with his shot.

My team was lacking in the leadership category, so I snagged Hanks, a proven Conductor.

When you’re down on your luck this holiday season, take a huge bite of salmon steak.

How’d we do? Feel free to channel your inner Mel Kiper Jr. in the comment section below. But just remember, save the naughty stuff for your sister-in-law.