ATLANTA — It was all there for the taking for Georgia as they took the field, looking to finish off the SEC season with a title crown. Unfortunately for the Dawgs (12-1), Alabama had other plans for Saturday night in Atlanta, as they punched their ticket to the College Football Playoffs. The Dawgs will exit the stadium 3-6 in SEC Championship games and Kirby Smart is still looking to get over that hump.

Nick Saban’s Alabama team took a 41-24 victory over the Bulldogs to win the SEC Championship.

Predictions keen on the matchup between the top-rated team and defense in Georgia and Bama stated that Crimson QB Bryce Young would need to elevate his team for the victory.

By the end of two quarters, Young broke Cam Newton’s record for most passing yards (281) in a half by throwing 286.

Once all four quarters wrapped, and the celebrations poured in for the ‘underdog’ win, Young finished with the most passing yards by a quarterback in an SEC Championship Game. Young completed 26-of-44, throwing for 421 yards (the new record) and four total touchdowns. His 40 yards rushing put him at 461 overall. The sophomore was named Player of the Game, to the grief of Kirby Smart and the defeated Bulldogs. 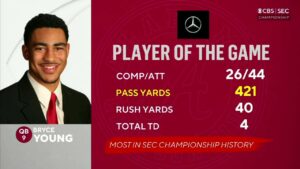 Alabama secured a spot in the College Football Playoff — their seventh appearance in the last eight years.

Here’s how Bama built this victory, quarter by quarter.

As the sounds of techno music played over the loudspeaker, it felt as if this might be Georgia’s last great opportunity to cut the game to seven points. there were 13:16 left on the game clock and the Dawgs were getting the ball back, after forcing a Bama punt. The Dawgs were finally running the ball on consecutive downs, but Stetson Bennett was picked off for the second time today, as Jordan Battle also ran it back for the touchdown. Alabama had just put this game to bed, with 11:59 remaining in the 4th quarter. It was 38-17 at this point, with Georgia on life support. I Definitely wouldn’t have thought we’d arrive to this point, this early. But Georgia did this to themselves, with its horrible play calling and not being able to pick up more than 5 yards on a carry.

But, the Dawgs play calling actually found some life, when they drove 75 yards in 2:17 for the touchdown. If there was ever a time for the Dawgs to finally wake up, it was this point, as fans were already headed to the exits. The score was 38-24, but the Dawgs weren’t finished just yet.

It’s hard to imagine a team struggling this much, but Georgia made it look ugly. The Dawgs ended up wasting the opportunity to cut the lead, and punted it back to Alabama, with 7:06 remaining. Looking at this Georgia defense, Alabama wasn’t having to pass out of necessity, which helped the Tide finish off the Dawgs. That was the theme all evening for this game, that can be applied to Georgia. Passing out of necessity is very much different than passing the ball out of luxury. The Dawgs found this out the hard way on Saturday night, as Bryce Young slung the ball all over the defense, giving them the upper hand all evening. There’s a reason why Alabama was able to work on killing the clock, with 5:00 remaining.

Alabama took the opening kick and made Georgia pay within two minutes. Bryce Young again, led the Tide down the field, capping off a 5 play, 75 yard drive with the 55-yard TD pass to Jameson Williams. This team had scored on its last five possessions and were looking damn good in the process. At this point, Young had 350 yards passing, dominating the Dawgs through the air.

For Georgia, it never came easy for the Dawgs in the third corner, even when the referees were calling this like an NFL game. The Dawgs would draw their 3rd defensive pass interference call of the game, extending the drive. If the point was to test the Tide deep, they were playing it perfectly on extended passes. Stetson Bennett picked up another first down with his feet and extended the Dawgs, only for two more plays. A pass that was intended was Brock Bowers was intercepted by DeMarcco Hellams, and Alabama made Georgia pay once again.

It was time to see if Georgia was going to hang around in this game or hand it over to Alabama, with 5:58 remaining in the 3rd quarter. The time was now for the Dawgs, if a comeback was in store for this team.

I know it’s hard to forget, but Georgia hasn’t had to worry about coming back from a huge deficit this season, so when they were down 31-17 late in the third quarter, the Dawgs were in uncharted territory. But, Kirby Smart made it clear that the team wasn’t surprised, he just pointed out the snowball effect.

“I wouldn’t say surprised. I think there’s a lot of comeback and fight to get the game back to where it was. We’re driving down with a 14-point game and had a chance to score to make it seven. I had a lot of confidence. We had stopped them two or three drives in a row. We didn’t want an onside kick. We said let’s kick it deep and stop them. We did and drove the ball down, and then we stalled out.

“There was a snowball,” Kirby added. “There was a period where we didn’t play well, but there was also a period there where we came back and had a chance to get it to a seven-point game, and we didn’t do that.”

The Dawgs offense managed to gain 100 yards in the 3rd quarter, but were outscored 7-0 by the Tide. On the last play of the quarter, Brock Bowers dropped a touchdown that would’ve made it 31-24, then the Dawgs decided to go for it on 4th down. Well, just like the rest of the game, nothing much was going in the Dawgs direction, as Bennett overthrew his receiver and we headed to the 4th quarter. This game felt on the brink of being over.

For all the talk about Georgia’s defense all season long, Alabama racked up 365 yards in the first half, making the Dawgs look terrible in the process. Even scoring on four straight possessions is embarrassing enough the 1st ranked defense in college football. Simply put, the Dawgs couldn’t keep up with the elusiveness of Young.

But, a lot of this success came from the Tide’s offensive line, who performed much better, compared to their outing last weekend against Auburn, which Nick Saban pointed out.

“I think the offensive line really answered the challenge that we put to them in terms of them being more physical in this game. They probably prepared a little very important. Offensive line did a really good job of blocking their pressures. Gave Bryce the opportunity to operate, which he did a magnificent job of all night. So great team win for us.”

Bennett found Darnell Washington wide open in the back of the end zone for the Georgia touchdown. A big way to start the quarter, but Alabama was ready to fire back. Even though the Dawgs held the lead, Alabama struck back quickly, as Young hit Jameson Williams across the middle, with him taking it 67-yards to the house. Just as quickly as the Dawgs scored, the Tide responded with a quick strike, making it 10-7.

Alabama found success down the field, as Young continues finding Williams for big gains, this one being a 23-yard strike. This all led the Tide to driving 80 yards on 6 plays, with John Metchie catching a beautiful pass in the back corner of the end zone, giving Alabama a 14-10 lead, at the 9:45 mark. These drives were put together off a tired looking Georgia defense, who was having trouble containing the edges.

By the way, this crowd has to be 70-30 Georgia, as the Tide didn’t travel very well to Atlanta. Georgia went three and out, but did end up punting the ball and downing the ball at the 6-yard line. The luck on special teams strikes again for the Dawgs.

Just as Georgia was about to get the Tide to punt, Young hit Slade Bolden as he was falling down, extending the drive. That’s one tackle the Dawgs wish they could have back, as the Tide made them pay, a few plays later. Alabama had to end up settling for a field goal, after their trick play was sniffed out by the Dawgs. The 33-yard field goal from Will Reichard made it 17-10 Alabama, making things a bit more comfortable, with 3:28 remaining in the first half.

Nick Saban was asked after the game about struggling in the first quarter, but starting to find their offensive rhythm as the second quarter began.

“I think sometimes when you start a game, the speed of the game gets you a little bit. The speed of their defense, maybe a couple times their backs got outside of us because it probably happened a little faster than what we practiced and what we’re used to.

“I think once you sort of get used to the speed of the game, like their pass rush and all that, I think you start operating a little bit better,” Saban added. “Our efficiency got much better on the offensive line as well as on defense.”

Thanks to some flags on the field and Alabama not knowing how to cover the downfield pass, Georgia went 75 yards on 3 plays, capped off by Bennett hitting Ladd McConkey for the 32-yard touchdown. This Tide defense looked scared in the secondary and were getting beat the entire first half. The penalties were horrid, and it led to Georgia tying it up 17-17.

Alabama’s Young was helped out by some rough secondary play by the Dawgs, as they gave up another third down, with an open man in the flat. Luckily for Young, he recovered his own fumble, on the 14-yard scramble. Again, I have no idea what Georgia was doing in the defensive backfield, as they continued to give up plays, mostly on the ground.

The 287 yards passing in the first half from Young is a new SEC record, as he broke Cam Newton’s previous record. He wasn’t done, as Young scrambled 11 yards for the Touchdown, giving Alabama a 24-17 lead. The Tide had now scored on their last four possessions, after that 9 play, 75 yard drive. Simply put, they were out-scheming the Dawgs defense. Kirby Smart decided enough was enough and took a knee, as the two teams went to halftime.

After both teams ended up punting to each other on their first possessions, it was time for Georgia to get to work on the ground. Alabama found itself looking for the edge pretty often, in the run game. But as for Georgia, they were content, running the football and completing a few down field shots.

Bennett hooked up with Brock Bowers for an 18-yard pass, as it put the Bulldogs in scoring position. The Dawgs rushing attack continued finding way a way to gain the tough yards. Rushing for 26 yards, which was also due to Alabama not converting on a the third down, preventing the drive from further success.

At the end of the first quarter, Georgia led 3-0. The Dawgs were led by Bennett, who was 8-10 for 126 yards. The Bulldogs out-gained Alabama 156-46 and rushed the ball for 33 yards. They are finding the consistency on offense at the moment.