LeBron James is a fraud. The biggest one in sports. He’s also a hypocrite of the worst kind. Most of the time, LeBron proves these things on topics he knows nothing about — politics, social issues, history, The Godfather. This time, however, he proved his idiocy while discussing basketball, a topic he does know.

A year ago, comfortably locked into a top playoff seed, the social justice warrior campaigned for a play-in tournament to spice up the tanking NBA playoffs. Now that he may have to participate in the extra tournament himself — the Lakers are currently the 6th seed — LeBron has called for the guy who came up with the idea to lose his job. Fire the SOB.

Readers who haven’t watched an NBA game this season — in other words, most sports fans — are probably wondering why the Lakers’ seeding is much lower this season. That’s because LeBron James suffered a devastating, career-changing, America-altering injury. This novel injury is known as a “high ankle sprain,” something LeBron says is so rare that he will never, ever be able to fully recover from it.

At this point, many normal people want to know how they can support the cause of exposing this guy. Look no further than OutKick’s critically acclaimed LeFruad line: 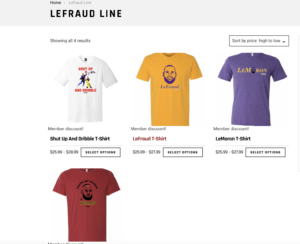 How funny would it be if LeBron and the Lakers have to participate in the play-in tournament?