Punk and Danielson are dealing with recent injuries, Omega has been on the shelf from multiple surgeries since November, and MJF is at the center of a work/shoot that has him off AEW programming right now.

So obviously, AEW had terrible luck with losing this many key figures so close together (though, in theory, AEW is keeping MJF off television as part of a storyline.) Not having Punk, most notably, could cost the company PPV buys. And still, the lineup of matches is one of the more intriguing of the year.

If Omega is the best in-ring performer in the world then Kazuchika Okada is the second. The Omega-Okada rivalry is responsible for the two highest-starred matches on record. Their 2018 classic at Dominion 6.9 In Osaka-jo Hall is the only match to reach 7 stars. So having Okada on the card is a major shot in the arm.

Okada will compete in a four-way match for the IWGP title with Adam Cole, Hangman Adam Page and current champion Jay White. 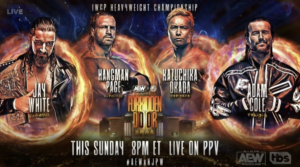 As you can tell from his AEW debut, Okada — a Japanese wrestler — is the fan-favorite in the United States:

The sound of that coin drop can only mean one thing: it's #TheRainmaker himself Kazuchika Okada (@rainmakerxokada) here at #AEWDynamite LIVE on @TBSNetwork! pic.twitter.com/l9INNq15Fo

In a hypothetical draft, a company would draft these four performers in the top 10, given their ages and current status.

Speaking of talents to build around, that brings us to Will Ospreay. Since we’ve established Omega and Okada are one and two in some order in the ring, Ospreay will compete in a one-on-one with Orange Cassidy.

.@orangecassidy and @WillOspreay giving the world a preview of their forthcoming battle this Sunday at #ForbiddenDoor! Watch #AEWDynamite LIVE on @TBSNetwork right now! pic.twitter.com/Pe1yU6tPxl

The original plan was for Tanahashi to face CM Punk for the title, but AEW had to swap in Moxley following Punk’s injury. Moxley isn’t Punk in terms of drawing power, yet he’s a top-notch worker and a match with Tanahashi has been brewing for three years.

The mid-card sells itself with some of the best performers from both companies, including The Young Bucks, Eddie Kingston, Zack Sabre, Tomohiro Ishii and FTR (Dax Harwood and Cash Wheeler).

Pretty solid card given the unavailabilities of several top stars.

I’m all in. But the Wrestling Gods better heal up the missing performers by the end of July and make good for causing all these injuries at once.