It’s that time of the year where sports fans are placing their bets not only on who they think will take home the Super Bowl in early February, but also are collecting on bets made back prior to the start of the season.

One lucky bettor is one huge New Orleans Saints fan today, as according to a tweet from Fanduel Sportsbook a Super Bowl win by Drew Brees and company will net this lucky bettor a whopping $40,380.

On a bet that cost this bettor just $24.

So far this customer is a perfect three-for-three in picking the champions of the major sports leagues, with all that’s left on this person’s ticket the NFL bet. 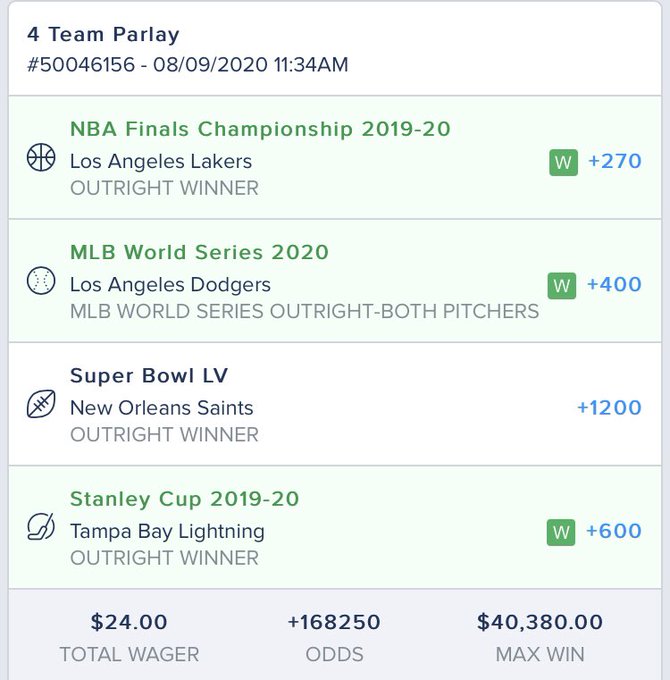 As one can see, the Los Angeles Dodgers at +400, the Tampa Bay Lightning at +600 and the Los Angeles Lakers at +270 all came through – now this bettor is set to live and die with every play of the Saints and Tampa Bay Buccaneers Sunday evening.

Even at that though the bettor needs the Saints to win next week in the NFC Title game that would be in Lambeau Field against the number one seeded Green Bay Packers, and then they would need to win Super Bowl LV against either the Kansas City Chiefs, Cleveland Browns or Buffalo Bills.

The Saints right now are +550 to win the Super Bowl on February 7th in Tampa.