I’ve seen the stories, I know people who have gone through it, but to experience it on a personal level is something I will never forget. It’s hard to put a value on past memories, especially since they make up a chunk of your life. But, that’s what I’ve been facing the past six months as I’ve watched someone close to me battle for his life.

I grew up on college football and was raised in the Deep South, where Alabama and Auburn were the only schools you could cheer for, especially if you wanted to stay in the good graces of friends on Saturdays. But this rule didn’t apply in my household, especially when the orange magnets were thrown on the car every Friday before heading out of town. I was raised by a father who bled Tennessee orange and a mother who didn’t really care either way. So, the nine hour drives to Knoxville five or six times a season were common for me. It was time with my father, time that I truly cherished, time that you couldn’t put a price on. To be honest, it didn’t matter which team I was dressing up to cheer for when I was young, it was all about the time my dad and I spent together cheering for that team.

Almost every Friday, my father would make up some excuse to get me out of school early, just so we could get an early start up I-65. Sometimes it would be late at night, after a local sporting event or birthday party my mother would make us attend before leaving town. It was football season, and nothing was going to stand in our way of enjoying the weekend, no matter how short it might be. No, my parents weren’t divorced, but she expected us back in Mobile before school started on Monday morning. There’s nothing like it, I don’t care which school you cheer for. Just loading up the truck and getting to spend quality time with my dad, talking about life and hitting up our favorite stops along the interstate as we trekked north. 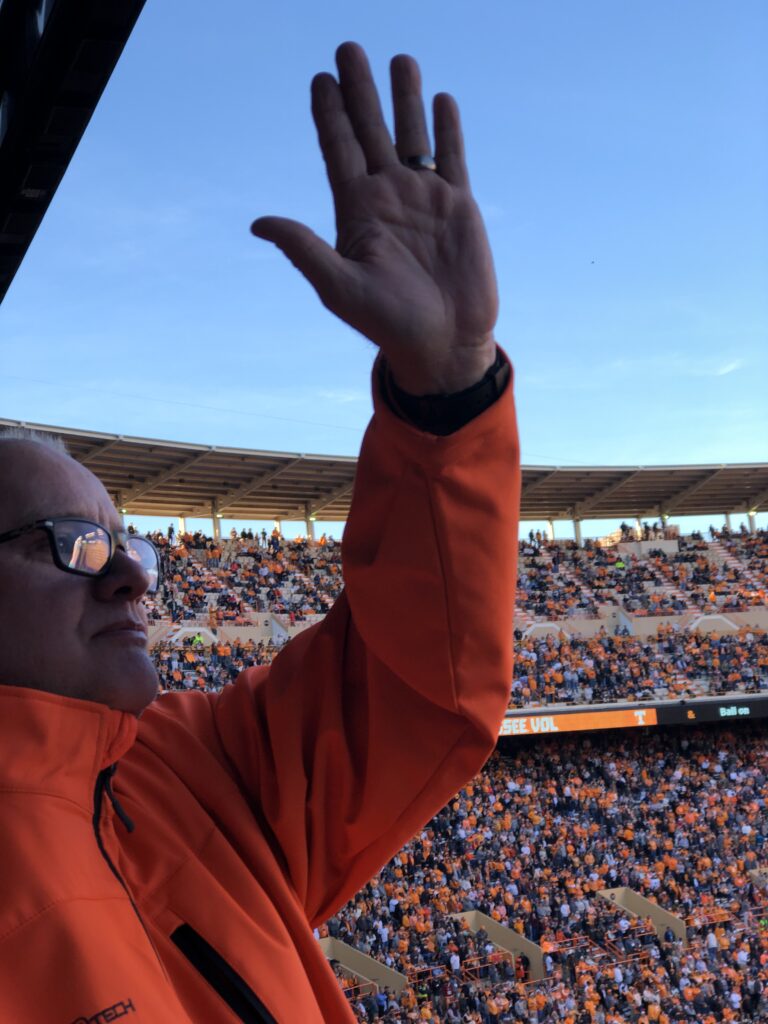 The road trips continued when I was in high school, though by then, we’d usually have to leave after a Friday night football game. But, we’d make it in time to see my dad’s favorite team take the field, and I was still enamored by the surrounding 100,000 people who sang “Rocky Top.” Thanks to my father, I had the opportunity to experience some of the greatest games in college football. We were there in December of 2001, as Tennessee took on Florida in Gainesville, with a spot in Atlanta on the line. I was there on a Monday night in Baton Rouge, as LSU and Tennessee battled it out a few days later than expected, due to a hurricane. I remember watching our hometown boy Tee Martin lead Tennessee to a national championship, while I watched the pure joy on my father’s face. Yes, I was there in Birmingham when Peyton Manning threw a touchdown on the first play. I was very young at the time, but my dad got us out of the stadium without being harmed.

See, it wasn’t about the team we were watching, it was about the experience of doing it together. Even to this day, as I cover my father’s beloved Vols, I sometimes sneak out of the press box and go spend a few minutes of the third quarter watching the game with him before I have to get back to work. That’s what our relationship has meant to me, especially since he sacrificed his time while I was growing up to find those moments for the two of us — no one else, especially not my two little brothers, who didn’t really care at the time. No offense, guys, if you’re reading this.

But that changed in April, when we received a group text that dad needed to chat with us. I was actually pretty calm because I thought it was about something else. Boy, I didn’t see this one coming, as his face popped up on the Group FaceTime. I could tell immediately as his eyes began to water that something else was up. Then he finally hit us with the news: cancer in the throat area. To say I was devastated would be an understatement, I was totally numb. As he explained his diagnosis, all I could think about were those times we spent on the road and in a college football stadium. That might sound selfish, but that was “ours,” and for a while I didn’t know if I’d ever get to experience it again. 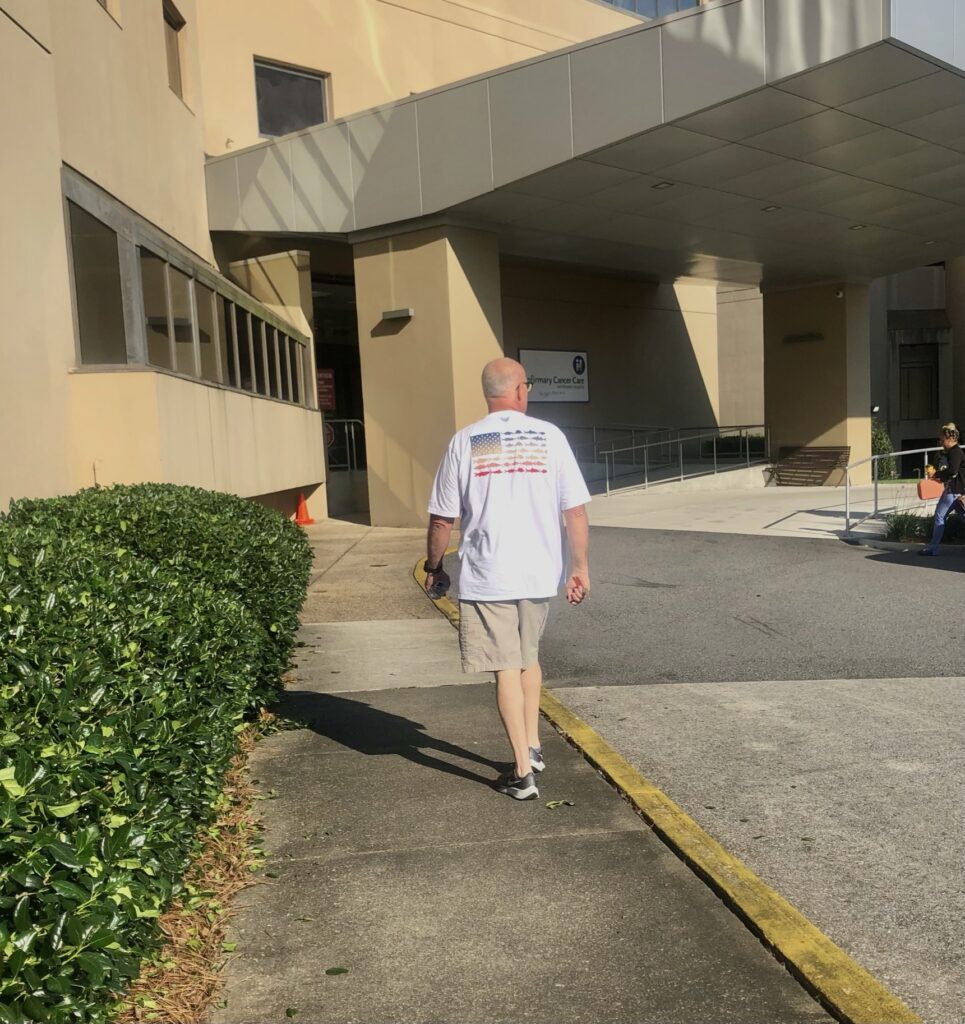 My parents were ready for the challenge, and they laid out the upcoming course of treatment. Mom knew her life was about to change and that Dad had one hell of a fight on his hands.

I was stuck though, even when I was busy covering a Tennessee baseball team that was playing in Omaha. Nothing felt right. I kept having flashbacks to all the great times we had, while wondering if we’d ever get to have them again. Not many folks knew, the few who did were my best friends, who I could confide in, knowing it wouldn’t make the rounds. So, as my father was going in every day for treatment, I was just trying to put one foot in front of the other, not knowing what each day would bring or what the daily prognosis would be.

By the way, if you want to see what love looks like, just think of my parents. Not every day was good during this process, but my mother turned into superwoman, and she has taken care of my sick dad.

There was one day around my birthday in late June that gave me a jolt of energy I wasn’t expecting. I was talking to my father, trying to give him the latest updates on his team, staying away from the cancer talk as much as possible because he had heard it often enough. Before we hung up the phone, he said something about being ready for the first home game. Now, this caught me off guard a bit, because I have seen what this horrible disease does to people. I honestly didn’t know if my dad would make it, which scared the shit out of me. How could I go through a season of college football without my dad either sitting below me in section T or talking with him over the phone about how his team had played?

Him telling me he’d be ready for the first game was the kind of fight I needed to hear out of my dad. Now I could at least hope that this horrible disease wouldn’t take him away from us. I wasn’t done yet. I needed more time. I needed more games. I need more opportunities to walk down the bleachers and sit with him and my family. I just needed more.

So, though he has finished his treatment and begun to try to gather his life back, it has taken time. He still can’t taste anything, and he gets pretty tired often, though it’s much better this month. He’s trying to keep his weight up by drinking protein drinks that replace meals. Since he cannot taste anything, he doesn’t want to eat anything. Hell, I don’t blame him. But the most encouraging part of it all is that he’s fighting. He fought through two months of non-stop treatment. He now battles different problems every day, but he doesn’t complain.

I keep reflecting on him telling me he’d be ready for the first game. That gave me hope, but it also showed me how much he knew that would mean to me. He wanted to be ready to experience Neyland again, to see his favorite team run through the “T” and have his son come down from the press box to hang with him in the 3rd quarter.

If it weren’t for the college football opener, I don’t know where my mind would’ve been, probably still in the smog of trying to picture my dad not being here. I told him last week while he was in Knoxville that I didn’t know if we’d ever get to experience those moments again, and yet we were watching a football game at the time. He stood up from the chair and came over to me for a big hug, and there was only one thing on my mind.