We’ve seen this coming for a couple days now, but the San Francisco 49ers officially announced today that they will be moving to Arizona for at least the next few weeks after Santa Clara County in California banned contact sports through December 21st over COVID-19 precautions (via Ian Rapoport): 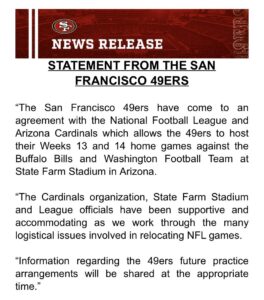 Each of these new stories doesn’t really surprise us anymore. We’ve become numb to them. It’s a pretty big deal, though. Think of the human element. The 49ers players and coaches have to pack up and move at the drop of the hat, potentially leaving their families behind for a month.

We don’t know what Stanford football is going to do yet. Jon Wilner, who is as plugged into the Pac-12 as anyone, tweeted this morning:

If Berkeley mirrors the restrictions in Santa Clara Co, I could see Cal and Stanford creating a double bubble in the NW. Both finish vs the WA and OR teams

(Note: This is pure conjecture on my part. Plenty for teams still to sort through.)

Imagine being told a year ago that the 49ers and Stanford would have to move in order to finish their seasons.

Update: Wilner adds that Stanford will indeed be moving out of state as well: