Are you planning a trip to Paraguay with dreams of swimming in the Paraguay River like the locals in the Itá Enramada neighborhood on the outskirts of Asuncion? You should be on high alert for piranha who have killed four swimmers and have injured another 20.

Things are so bad on this stretch of the Paraguay River that the piranha are taking out swimmers like a 22-year-old man who was taken down by the piranha and so badly bitten that it took a 45-minute search to find his body, according to The Mirror.

Local news outlet La Nacion reports that in another case a 49-year-old man was killed after piranhas targeted his face.

Biologist Héctor Vera told La Nacion that piranhas move in schools and are aggressive during breeding season which takes place from October to March. Peak breeding is in December. Vera noted that piranhas typically go for the heel and toe area, and bites to the face and hands are less common.

So just stay out of the water, right? Well, take a look at the weather in this part of the country and you can see why the locals have been going in for a swim. It’s blazing HOT! 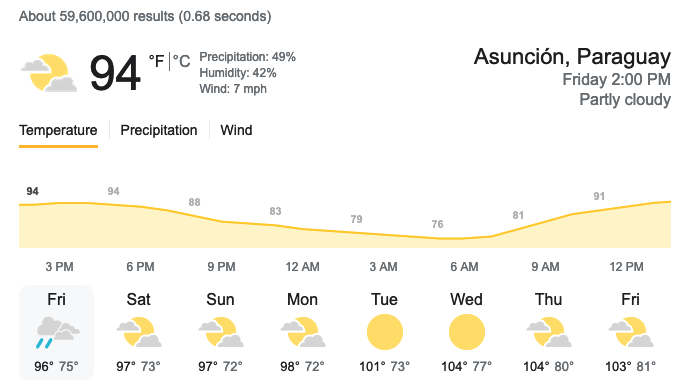 Argentine biologist Julio Javier Capli told ABC Digital (Paraguay) that swimmers should avoid areas where there are floating or submerged aquatic plants. THAT’S WHERE THE PIRANHAS HAVE THEIR NESTS!

Capli also notes that if the piranha aren’t an issue where you’re swimming, you always have to watch out for the stingray.

Long story short, if Paraguay is on your travel list this winter, you might want to find a nice 3-star hotel and hang out at the pool. There’s no need to have your face chewed off by piranha just trying to protect their turf. Swim some laps in the hotel pool and call it a day.

It’s not just Paraguay where there’s an issue. In November, a 13-year-old girl had her toe bitten off by piranhas while swimming in Argentina. In total, 20 swimmers were injured in Laguna Setúbal near Santa Fe, Argentina.

You’ve been warned. Protect your toes, face, hands and body at all time this time of year in Paraguay and Argentina. And if you think that’s just some basic fish bite on your toes, you better think again. You could be the next person to be knocked off by the piranha mafia.